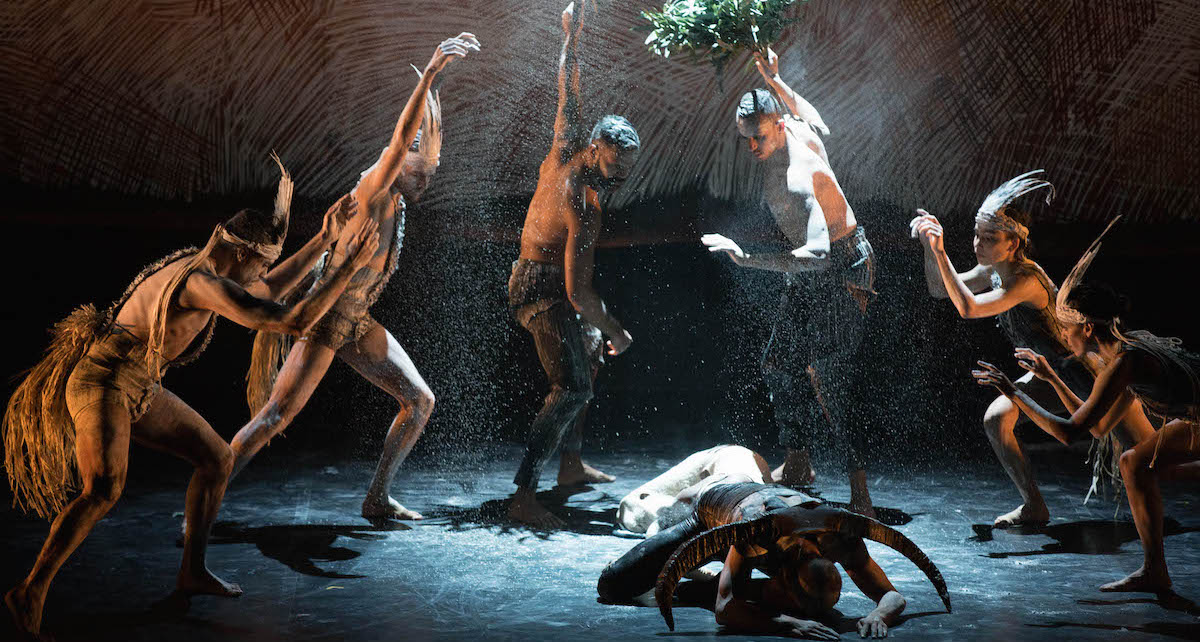 This most impressive triple bill, OUR land people stories, fuses visual arts, history, family and culture in three exciting works. The choreography for all three works is dazzling and trademark Bangarra, blending traditional Aboriginal/Torres Strait Islander and contemporary dance, and it was magnificently performed.

Bangara Dance Theatre in ‘Macq’, as part of ‘Our Land People Stories’. Photo by Wendell Teodoro.

First was Macq, choreographed by Jasmin Sheppard, which looks at Governor Macquarie from an Aboriginal perspective and also acknowledges and remembers the 200th anniversary of the Appin massacre. Macq was created in 2013 for DanceClan3, but for this version two new musical sections were developed and existing ones tweaked. The soundtrack includes voiceovers of letters written by Macquarie, and we see him agonizing with guilt and tormented by nightmares. The set is mostly very sparse and simple and includes the use of a long, large table. At one point, to represent Civilization As We Know It, a large teapot and a chandelier, among other things, are carried on stage. We see the juxtaposition of the two worlds — the white British in their red or blue military uniforms and the Aboriginal First Peoples. Macq opens with a circle of women in white, first with their backs to us before eventually drifting away, leaving a lone solitary woman to mourn her husband in a striking Macmillan-like pas de deux with his body. Another section sees eight men who become a haunting, overlapping sculpture as if hanging, dead; it is, in some ways, reminiscent of Goya or Blake illustrations. Macquarie was danced brilliantly by Daniel Riley, who has an intense, dramatic solo, similar in style to Béjart or Kylián, wherein he uses the table and gun-like movements, pondering what to do. There is a tense confrontation between Macquarie and the Aboriginals and an unsettling duet where the hood of a victim ends up on Macquarie’s face…or does it? The ending is dream-like with a vision of a woman in a feathered cloak.

Leonard Mickelo with Bangarra in ‘Miyagan’, as part of ‘OUR land people stories’. Photo by Wendell Teodoro.

Next was Miyagan, choreographed by Beau Dean Riley Smith and Daniel Riley, (who happen to be cousins), a piece about kinship, the bonds indigenous people share with the land and their cultural custodial responsibilities. It traces the family history of the Rileys and acknowledges and explores the culture of the Wiradjuri​ , their customs and language. As the choreographers say, “Our heartbeat is resilient and strong.” Some of the choreography is Graham-like; at other times, it is joyful and exuberant as the dancers tumble, rock, sway, bounce and cross the stage. Undulating arms are sometimes used; at other moments, arms are long and stretched. Small, slinky solos are terrific. There is also a hip hop influence and a youthful joy. Sometimes, there are soft, creamy jumps. All of the movement demands a dynamic, sizzling, stretched, long line from the dancers. The soundtrack combines futuristic sounds and traditional Aboriginal songs. Matt Cox’s lighting is splendidly atmospheric. There are strange hairy “spirit creatures” who interact with and shadow the humans. The set is a wonderful design of emu feathers that look like branches; the central feather is only included for the final section. Miyagan displays another mysterious ending as a woman in a long white, trailing dress appears.

After interval came Nyapanyapa, choreographed by Stephen Page. It is based on the work by Nyapanyapa Yunupingu, a Yolngu artist who is of major importance in the Aboriginal art world. She is an elder from the Gumatj clan and, in 2008, won a Telstra Award for her work recalling an attack on herself by a buffalo. Nyapanyapa is inspired by her paintings and luminously explores the relationship between the artist and nature. The dancers become the land and various creatures from her imagination and memories. Charismatic dancer Elma Kris is captivating in the eponymous role, with great stage presence and a shining inner spirituality.

Daniel Riley in ‘Nyapanyapa’, as part of ‘OUR land people stories’. Photo by Jhuny-Boy Borja.

Waangenga Blanco was muscular and strong, with a dominating presence, as the Minotaur-like buffalo. Smith and Rikki Mason were grey and darting as the dogs; Sabatino and Yolanda Lowatta​ danced impressively as the sisters; and there was a supporting ensemble of emus, fish and trees. Large silhouettes of the “Lost Wendys” appeared like trees at one point, and the dancers used spiky arms and hands. The backdrop projections featured some of Yunupingu’s work, some in close-up and some incredibly beautifully, thickly textured.

A most striking, vibrant programme, visually stunning and thrillingly danced, OUR land people stories is a glorious way to celebrate internationally renowned Bangarra’s 25th birthday and to mourn the recent passing of luminary David Page.