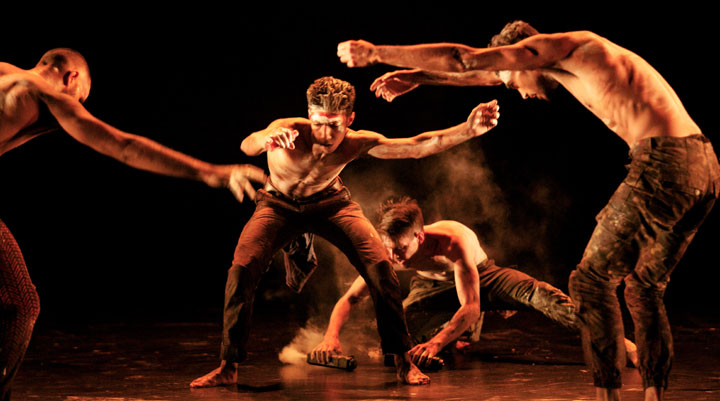 This week, the art world lost a treasured ally. Celebrated musician and composer David Page passed away on April 28. David was a son, brother, uncle and cousin to the Nunukul and Munaldjali clans.

Appointed resident composer of Bangarra Dance Theatre when it was established in 1991, David had been with the company ever since, composing almost 30 works and creating the very ‘sound’ of Bangarra.

As one of 12 siblings, David grew up giving backyard performances with his family in Mt. Gravatt, Brisbane. In his teenage years he became the singer Little Davey Page, the first Australian to be signed to the famous Motown label, Atlantic Records. He went onto create a one-man show, Page 8, in collaboration with his brother Stephen. It was one of many collaborations between the brothers, and one which David starred in with great success in Australia and abroad.

David trained as a musician at the Centre for Aboriginal Studies in Music (CASM) at Adelaide University, studying saxophone, voice, composition and song. The reach of his talents also extended to acting, performing many acclaimed roles with Queensland Theatre Company, Belvoir and Sydney Theatre Company, as well as film.

David was the recipient of many high profile awards, including three Helpmann Awards for Best Original Score (Mathinna 2008, Belong 2011 with Steve Francis and Blak 2013 with Paul Mac), a Green Room Award for acting in Page 8, four Deadly Awards for sound – as well as an ARIA nomination.

The composer’s 25-year career as an integral part of Bangarra Dance Theatre is especially significant for the world of dance. His work for the company fused traditional language, song and instrumentation with electronic and classical music and the sounds of nature becoming almost synonymous with the choreography.

“So perfectly does it work to illuminate every nuance of the dancers that it’s impossible to separate it from the choreography,” stated a review of Ochres from Australian Stage Online last year.
In a media release this week, Bangarra said: “David had an innate talent for giving voice to Country and to land that could awaken emotions from deep within… The Bangarra clan is unbelievably saddened that our brother David Page is no longer with us.”

A public ceremony to honour the late artist will be held on Monday 9 May at 11am, at  the Queensland Performing Arts Centre’s Concert Hall in his hometown of Brisbane. The Page family invites those who wish to pay their respects to join the family to celebrate the life of one of Australia’s most respected creatives.