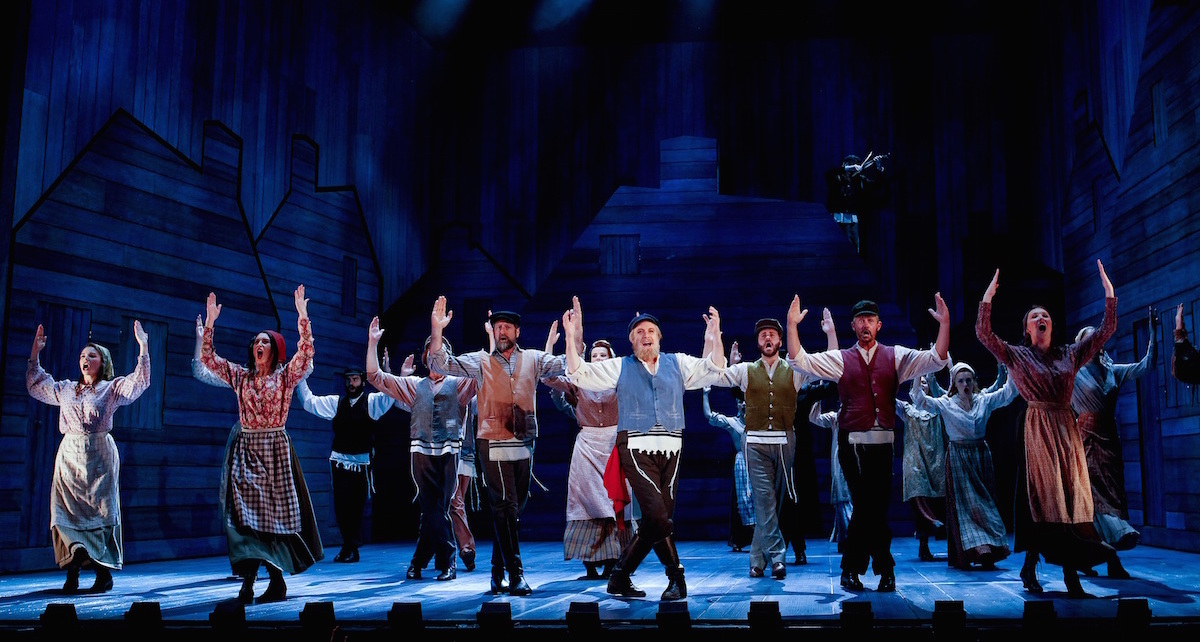 Fiddler on the Roof, the classic story of a changing era, a coming of age tale, with a very rich heritage, is a story about the world around us changing, becoming unfamiliar, but how we as human beings have the capability to mold to that and face the future, no matter how uncertain. Set in a time and location that endured such turmoil, pre-World War I, when political and social tension in the world had been subtly building to for quite some time already, creates a poignant backdrop for such a story. Alongside the gypsy-like migration of the Jewish people, borne out of necessity, the rejection that is suffered, contrasted with their long-enduring spirit of resilience, is also a story that is as old as time itself.

Anthony Warlow in the Australian Production of ‘Fiddler on the Roof’. Photo by Jeff Busby.

Being a classic, it would be easy for this show not to be relatable to today’s audience, but the direction and the interpretation by the cast have brought it a sense of relevance, alongside telling some of the subtleties of history. The Russian politics of the day were well-written into the story and highlighted throughout.

In terms of the performance, the antagonist characters were not portrayed as strongly as what would have been realistic for the time. The tension could have been a built a little more for these scenes, as this was the pivitol political climate of the day.

The roll of Tevye, traditionally played by Topol (in many international seasons of the stage show, including the last two Australian runs – 2005 in Sydney and 2006 in Melbourne) since his controversial casting in the movie as the same, would potentially be an incredibly hard act to follow, but Anthony Warlow holds his own, like only a seasoned performer of his caliber would be able to. With depth of vocals and personality, he carries the story as the central character with finesse, bringing out the highs and the lows in a subtle rhythm, drawing the audience into his (somewhat) internal dialogue and turmoil over the change that is occurring around him.

Warlow and Sigrid Thornton are a great match in the character department, with her passionate and feisty Golde next to his more subtle and complex Tevye playing off each other beautifully. Vocally somewhat of a mismatch, Thornton comes across weak next to Warlow’s vocal prowess, with which he commands all aspects of his character wonderfully. Thornton also struggled with choreographed movement but came into her own in the acting, as one would expect of such an icon of stage and screen.

The Australian Production of ‘Fiddler on the Roof’. Photo by Jeff Busby.

Dance-wise, the show seems to have really picked up in energy since the last Sydney season and was entirely vibrant throughout. The choreography contains a beautiful mix of traditional dance styles, although perhaps lacking in the finesse of the technique of these traditional styles, particularly the Russian, and also in the abandonment that would have been the case in such scenes in the real world. It is a very well-choreographed and fun show, however, and there is a colourful display of movement vocabulary not generally seen in other musicals. It is an educational experience for young dancers to see, who may be experiencing similar styles in their own training.

Vocally, the cast was very strong as a whole, and the full ensemble blended beautifully. Standout talent came from the three young ladies cast in the roles of the three elder daughters, Teagan Wouters (Tzeitel), Monica Swayne (Hodel) and Jessica Vickers (Chava), who were very much able to hold their own, particularly in “Matchmaker, Matchmaker”, which sets the scene for much of the context for the show, after the opening “Tradition”. Hopefully this show will be more successful for the talented Wouters than the short-lived The Addams Family, the musical in 2013 in which she played Wednesday.

Costumes and set were simple and effective, with all production elements lending compliment to the show in their own right.

Overall, Fiddler was a fantastic experience, with a great rhythm in energy, plot and character development. It is definitely one to take the whole family to, young and old, for a really great night at the theatre.