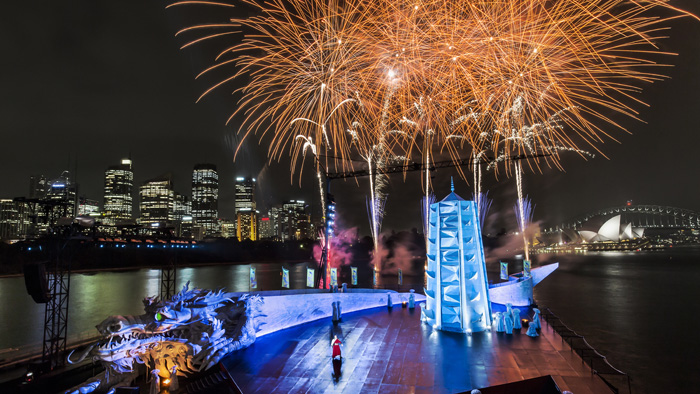 Ned Zaina, a Melbourne dancer, has been working with Opera Australia on its new production of Turandot. Here, he shares his story on what life is like as Dance Captain for this amazing new show.

Turandot is one of the most famous operas of all time. It is steeped in history and has had many of the greats take on its iconic Nessun Dorma, time and time again to huge acclaim. So to be part of this inaugural cast, set on Sydney Harbour, with an international director/choreographer, is incredible. Turandot is a strong opera, with stunning music, and this production delivers all the richness of a traditional version with a modern twist and Sydney flare.

My role as Dance Captain for the male dancers requires me to be the eyes and ears for all the men in our show. As well as performing myself, being Dance Captain gives me the opportunity to work closely with the director (Chen Shi-Zheng), assistant director (Andy Morton), assistant choreographer and all stage hands, which has opened up another side to the Turandot experience. I have been taking a lot of notes, videos, listening for each detail and trying as hard as possible to make the process of learning and developing the show easier for the dancers to absorb and achieve.

I am from Melbourne and trained at The Wells School of Dance, Danceworld Studios Australia and Patrick Studios Australia. Whilst in full-time training, I was fortunate enough to work for an array of choreographers, shows, festivals and galas, which gave me extensive experience in the professional world of dance. My first full-time contract, however, was with Norwegian Cruise Lines, aboard The Star.

The Turandot audition was by invitation only. As I had just finished a season of The Magic Flute at the Sydney Opera House with the company only a week prior, I was invited back to audition. The audition was split into females and males; the females had their audition in the morning, the males later that same day. We started with a contemporary combination, and then a cut was made. Those who were called back were then asked to learn a sword dance to see stylistically our suitability for the show. From this, the panel was then able to pull us into groups for our photos to be taken and to be sent off to Shi-Zheng (who was still in New York at the time), along with any material that was filmed throughout the audition process, so that he was able to make his final decision on the dancers.

Given that Shi-Zheng and also the assistant choreographer are both from China, the language barrier has been a hurdle at times, but for me it is all part of the learning experience and a great challenge. Shi-Zheng has been based in New York for a while, so his English is good; however, our assistant choreographer, Jay-Jay, came over with very little English. But we’ve worked closely together to develop a great working rapport, which always gets communication flowing with broken English and a lot of gestures.

Shi-Zheng and Jay-Jay have had a huge challenge laid before them, not only in piecing together a show of such magnitude but to also have to deal with the language barrier. They have been working with myself and Teagan Lowe (female Dance Captain) to produce all the movement, dance pieces and staging for the show. Stylistically, Jay-Jay has been a great source to learn from, and it has been really interesting learning first-hand how to execute moves with more focus and agility than what is normally expected from a dancer.

Another big challenge of Turandot has been the elements. Because we are set on the spectacular Sydney Harbour, on perfect days and nights, the whole scene is indescribable. We have had several stage calls, however, when the rain has been heavy and, as they say, the show must go on. Obviously, for dancers the rain is not ideal, particularly given the whole set is on quite a steep rake. We also don’t have a traditional dressing room set-up. Dressing rooms for the dancers and chorus members are ‘on land’, and we must be pre-set underneath the stage (which we call ‘the island’). Once we are set underneath the stage, we have to remain there for the duration of the performance – interval included. So quick changes, wig changes, make-up changes and continuous warm-ups are all things that have to be managed in thin walkways backstage. These are all challenges we face as part of the Handa Opera on Sydney Harbour (HOSH) experience; however, they are part and parcel of getting to perform in such an iconic setting.

Without giving too much away, the show is spectacular. The sets alone, against the beauty of the Sydney Opera House and Harbour Bridge, are breathtaking. The principals are blowing us all away in rehearsals; the Opera Australia chorus, as always, are sublime. And there are a lot of surprises, too, that the show is keeping tight-lipped on, so for all audience members it certainly will not be any ordinary night of theatre.