First performed in 2012, this presentation of Terrain is a thrilling, visually stunning revival of Frances Rings’ work, which was inspired by the natural wonder of Kati Thanda (Lake Eyre), a home for thousands of years to the Arabunna people. It has the distinctive Bangarra trademark of a sizzling combination of contemporary dance and traditional Aboriginal/Torres Strait Islander dance moves. It follows the moods and various seasons of Lake Eyre in short sections that also emphasize moments of Indigenous inheritance, identity-making and great struggle.

It opens with a storm, a crash of thunder and lightning. The dancers are sensational – sinuous and very capable of handling the very demanding, at times quite acrobatic, intricate choreography. There are unusual lifts, with bodies upside down. There’s a focus on the legs and feet, with writhing sculptural sections filled with sliding and slipping. Tangled bodies remind one of gnarled trees. Dancers climb on top of each other, and there are often birdlike arms and a flowing weightlessness in the section entitled “Landform”. 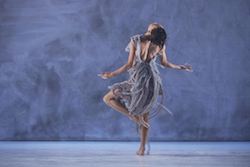 Solos and duets are interwoven into the various sections. Ensembles become duets or solos and return to ensembles. There are mermaid-like lifts and at one point, it is as if the dancers are birds trapped in mud or covered in oil. Sharp, staccato movements blur rapidly, becoming fluid. Spiky choreography contrasts and acts as a leaven when a male duo is followed by a solo, hypnotically energizing the performance.

In the early section, “Sheilds”, the men appear like ghostly apparitions, at various points hidden by their shields. Each is individually slightly different and with subtle variations in texture. Traces of salt or white dust shed as they move. Then the shields acquire shiny black designs on them in ominous warning. One man in the group is attacked from within.

David Page’s score beeps, hums and throbs. In parts, it is harsh, ominous and sparse, but this is contrasted with romantic, lush sections that flow and interact with the choreography.

Jacob Nash’s set design begins with a grey/white blank box – a never-ending salt plane – where the only ‘’scenery ‘’ at first is the bodies of the dancers. A series of linear spectacular backdrops, perhaps maps of the land seen from above, are the sole colour for much of the piece, with luminous swirls of gold light (by Karen Norris, whose lighting is crucial, especially in the first three sections) in “Landform”. A dramatic red and black cloth with a central focus of a circular black and white design was used for “Scar”, and a gentle green and brown background provided for “Reflect”. 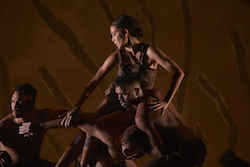 From “Landform” onward, the colour is built up in layers, representing the life that flows into the lake with the rare arrival of water.

Jennifer Irwin’s incredibly textured and detailed costumes are sensational. In one section, the skirts are full of what look like lacy holes. “Spinifex” sees the ensemble of female dancers, clad in wonderful grey costumes and a twisted tree-like headwear twist, bend and fold across the stage with lots of floorwork and sculptural poses in choreography inspired by the trees around Lake Eyre. In Irwin’s extraordinary costumes, iridescent shells are created by many layers of exquisitely textured fabric, specifically cut to reveal the lines and muscles of the bodies. In “Salt,” for example, Daniel Riley wears a furry/feathered encrusted, tight-fitting bolero-like jacket, which looks as if it is studded to resemble salt crystals.

The final mesmerizing section, “Deluge”, has the dancers in soft blue and green costumes against an opalescent grey background and the sound of rain.

Terrain showcases a narrative of strength, resilience and heartfelt connection to our country. It’s magnificently danced.