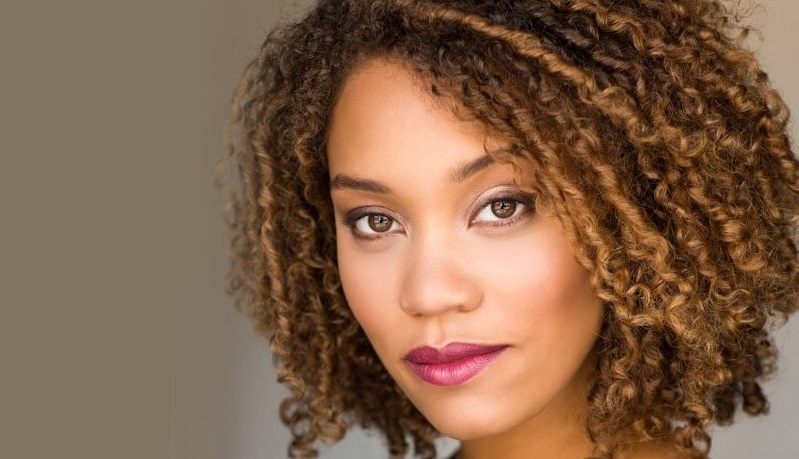 Learning multiple roles, practicing in the wings and being ready to jump on stage at any time, life as an “off stage swing” is anything but dull. Kirsty Sturgess is currently the swing in the Australia tour of Ghost The Musical, and she calls the job “an absolute joy ride”.

“Ghost is such a heart-warming and hilarious show that it’s hard not to have fun being a part of it,” Sturgess shares. “It also helps that it’s a cast of such great people that make coming to work each day something to look forward to! It certainly has been challenging simply due to the nature of being a swing and my first time at it, but it’s a challenge I feel very lucky to have, as I’m learning so much.”

As an off stage swing, Sturgess covers all five female ensemble “tracks”, as well as two leads, the sisters Clara and Louise. Only if one of those performers isn’t able to go on stage, for whatever reason, does Sturgess get to leap into a role, but she must be constantly ready, whether it’s at a day’s notice, or a few minutes.

“In the unfortunate event that two boys were out,” she says, “I would need to jump on for the male ensemble, too. Crazy, right?!”

When she’s not on stage, Sturgess chooses a cast member to shadow for the night, practicing traffic and choreography in the wings, her hair and make-up ready to go. She says it’s crucial for a swing to take advantage of the rehearsal period by asking lots of questions and practicing the choreography as frequently as possible “so it’s in your body and not a shock to the system the first time you go out on stage,” she says.

Mistakes happen, of course, and Sturgess advises future swings to be “kind and forgiving to yourself” when they do. “They’re not the end of the world,” she says, “Learn from them and move on.”

The Importance of a Good Representation

Sturgess stresses the importance of having a good agent, saying that trying to get work without one makes an already difficult pursuit “10 times harder. As you start to lock down contracts, you’ll find there is a legal side to the industry that no one teaches you about. In these cases, it’s important to have an agent with a good knowledge of the nuts and bolts to help you negotiate when needed.”

Sturgess is a graduate of Brent Street, Australia’s leading performing Arts Centre, in Sydney. She secured her role in Ghost through her agency, the newly formed Focus Talent Management. Focus is headed by international creative director and choreographer, Lucas Newland, who is also the owner of Brent Street.

“I have always felt that there are so many talented young people being trained, at such a high level, in Sydney,” says Newland. “However, when their training ends and they do not get that one agent they had their sights set on, they are so disheartened. There is a huge world out there, and with the creation of Focus, I am just trying to generate more opportunities for performers.”

If you’re looking for an agent, both Sturgess and Newland agree that you need to do your research. Try not to get caught up vying for only one or two agencies, but shop around and keep your options open until you find the one that is the right fit for you, and for your career aspirations.

“Look at the kind of work you aspire to do, as well as the work you are suitable for,” suggests Newland. “Sometimes these may conflict, so be prepared for this.”

But most importantly: “In the end, most agencies can get you into the audition,” he says. “It’s you who has to book the job!”

“Make sure there’s a mutual understanding about the direction you wish to take,” adds Sturgess. “Don’t forget, it’s your career. Make it what you want it to be.”

And Sturgess is certainly taking her own advice, with a CV – just three years after graduation – that would inspire any budding performer. Prior to Ghost The Musical, she has worked on RENT and Bring it On: The Musical, as well as several television commercials, fashion parades and video clips.

She’s also spent time doing further training at New York City’s iconic Broadway Dance Centre, which Brent Street has a strong affiliation with, and plans to do some short acting courses in the UK.

“I feel I have so much learning still to do and skills to improve on,” Sturgess says. “I’m keeping myself audition-ready, my options open and the emergency plan set to go should I need it!”

When: Thursday 25th February 2016
Where: Brent Street.
Address: Building 101, The Entertainment Quarter. Moore Park. Sydney. 2021.
Diagonally across from Hoyts
Time: 9:30am Sign-in for Dancers, Dancers who sing, Triple threats – those who do it all; 1:30pm Sign-in for Actors who sing, and vice versa

Auditions are open to singers, dancers and actors. Performers will need to excel in one or more of these genres. To secure your place, and for more information send your cv, head shot and any footage to info@focustalentmanagement.com.