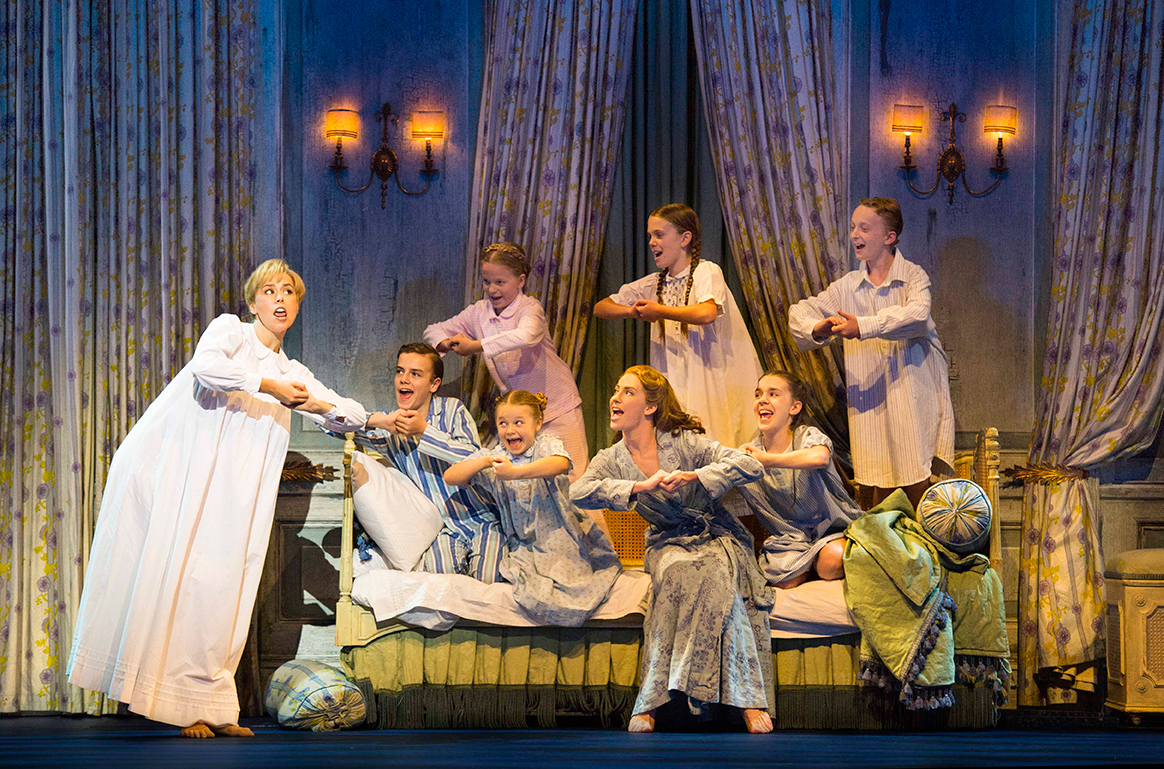 It’s been 50 years since The Sound of Music first captivated audiences on the big screen. Known for its many beloved songs, this story has stood the test of time, drawing a packed house to Sydney’s Capitol Theatre for The London Palladium Production of The Sound of Music stage premiere.

Amy Lehpamer as Maria Rainer in ‘The Sound of Music’. Photography by James Morgan.

A love story at its core, we follow the journey of Maria Rainer (Amy Lehpamer), a nun who takes on the mission of governess to Captain Georg von Trapp’s seven children. Lehpamer is a stand out in the role of Maria, with the right balance of youthful exuberance, innocence and warmth. You could be forgiven for thinking that the young Julie Andrews, who made this role famous, was on stage. With songs including “The Sound of Music” and “I have Confidence in You”, Lehpamer owned her performance, savouring every note of Rodgers and Hammerstein’s music and lyrics, securing her spot as a leading lady of Australian musical theatre.

To open the show, the nuns, led by Mother Abbess (Jacqueline Dark), gave a vocally exquisite performance of “Preludium”, which echoed as if in the depths of an abbey. Dark also gave a show-stopping performance of “Climb Ev’ry Mountain”, with the audience in complete awe of her strong and powerful operatic voice.

‘The Sound of Music’ Australian tour. Photography by James Morgan.

As Captain Von Trapp, Cameron Daddo is a marketable drawcard with a career in entertainment that spans over 30 years. While he brings a handsome stateliness to his portrayal of the stern Captain, his singing was soft and tentative without assuredness.

Another notable drawcard and musical theatre favourite is Marina Prior, who plays the role of Baroness Schraeder, the love interest of the Captain. Prior brought a different take to this character, creating a loveable and friendlier version of the Baroness who is vying to win the heart of the Captain and the approval of his children.

A highlight of the performance were the Von Trapp children, with the opening night cast featuring Stefanie Jones as Liesl, Jude Paddon-Row as Friedrich, Savannah Clarke as Louisa, Louis Fontaine as Kurt, Madison Russo as Brigitta, Erica Giles as Marta and Nakita Clarke as Gretl, all giving charming and delightful performances. This talented cast showcased their singing, acting and dance abilities, and, more notably in the songs “Do-Re-Mi” and “So Long, Farewell”, performed tightly choreographed routines reminiscent of the film. Jones’s vocal ability also shone in her performance of “Sixteen Going on Seventeen”.

‘The Sound of Music’ Australian tour. Photography by James Morgan.

Whilst this rendition of The Sound of Music was originally staged for the grand scale of The London Palladium, the sets on the smaller Sydney Capitol Theatre stage were simplistic, especially in showing the grandeur and beauty of the Austrian hillside.

Fans of the film will also be surprised to find songs paired with different scenes. Nonetheless, Rodgers and Hammerstein created music and lyrics that kept the show swiftly moving and the audience entertained.

The London Palladium production of The Sound of Music is now showing in Sydney at the Capitol Theatre. This will be followed by seasons in 2016 at Brisbane’s Lyric Theatre from 11 March, Melbourne’s Regent Theatre from 13 May, and Adelaide’s Festival Theatre from 9 August. For more information, visit soundofmusictour.com.au.