Here is the latest New Zealand dance news for December 2015!

The Royal New Zealand Ballet’s tour to the UK and Italy has been met with rave reviews for both of its touring programmes. Giselle, created by Ethan Stiefel and Johan Kobborg in 2012 and now considered one of the RNZB’s signature works, had its UK premiere in Edinburgh on October 27. The Herald – Scotsman called it “a classic Giselle that shows off company strengths at all levels … this is a good-looking production from a company crammed with talent.” 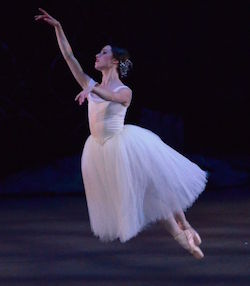 Lucy Green of RNZB in ‘Giselle’. Photo by Brendan Bradshaw.

Also having its UK premiere was the mixed bill The Anatomy of a Passing Cloud. This programme featured four contemporary works by choreographers Javier De Frutos, Andonis Foniadakis, Andrew Simmons and Neil Ieremia. The London Evening Standard called it “an intriguing programme from this versatile and independent-minded company”. Following their UK tour, including a first-ever performance at the Royal Opera House Covent Garden, the company performs in Udine, Vicenza and Rome, Italy, until December 3.

Submissions are now open for the 2016 Choreographic Research Aotearoa Symposium. The Symposium invites “presentations that attend to the changing status of disciplinary knowledge in dance and performance in the context of an increasingly transdisciplinary and decolonised field”. For more information, click here. Submissions close December 14.

The Cultural Office of the French Embassy in New Zealand and Auckland University of Technology are calling for expressions of interest for the 2016 Te Ataata Residency Programme. The programme is for a French creative practitioner to be hosted at Colab in Auckland. Applicants may come from an art, design or creative technologies background, and will demonstrate a strong engagement in new media and hybrid practices. The residency will enable the development of new initiatives and joint collaborations on topics of mutual interest. Applications close December 31. Click here for more.

Registrations are open for Contemporary UNZipped, a four-day workshop series for secondary dance teachers focusing on material that is appropriate for dance in Years 11-13. The workshops take place from 18-21 January 2016, and more information can be found here.

Another dance conference is happening for teachers of dance in Primary, Intermediate and Secondary schools. TRCC: Dance Moving with Change provides a platform for dance educators to continue learning together. It addresses key principles of the New Zealand curriculum, as well as responding to the dance sectors’ request for subject-specific professional learning and development. Registrations close 18 March 2016. More information here.

The Arts Foundation of New Zealand has recognised 10 artists at the Westpac New Zealand Arts Awards, with a total of $360,000 in awards distributed. Amongst the 2015 Laureate Award recipients were Director and Choreographer Sara Brodie; Kapa Haka Expert Wetini Mitai-Ngatai; and Choreographer, Dancer and Film-maker Daniel Belton.

Talented artists, innovators and leaders are being recognised for their outstanding contribution to Pacific arts at this year’s Creative New Zealand Arts Pasifika Awards. Among the winners is Neil Ieremia, internationally renowned choreographer and founder of dance company Black Grace, which celebrates its 20th anniversary this year. The awards will be presented at a vibrant ceremony in Wellington on Wednesday 4 November 2015, with Ieremia taking away a prize of $10,000. 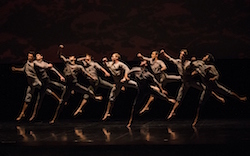 In its third year, the Women of Influence Programme is designed to identify, recognise and celebrate the 100 most influential women shaping New Zealand across 10 categories: Arts and Culture, Board and Management, Business Enterprise, Community and Not for Profit, Diversity, Global, Innovation, Public Policy and Rural. Dancer/choreographer Parris Goebel was awarded the Young Leader Award and has been honoured for her supportive, inspirational influence on young New Zealanders to pursue their dreams of becoming stars in hip hop dance. At 23 years old, she owns a dance studio, pioneered her own unique style of dance, and has choreographed for stars like Jennifer Lopez, Nicki Minaj, Janet Jackson and, most recently, Justin Bieber. Goebel spearheaded the success of a number of dance crews at the prestigious World Hip Hop International Championships, leading all-female dancers, Request, to win gold and put New Zealand on the global stage of hip hop dance.

For the second time, Okareka Dance Company will present its end-of-year Koanga Youth Project. This year, the event was designed to give young people with a passion for dance an opportunity to experience creating a professional production, focusing on Christmas. Audiences will experience a show built on movement that the students have created themselves, from provocations regarding their personal Christmas experiences and stories. The provocations are choreographed by Jessie McCall and Jesse Wikiriwhi, with direction from Okareka Dance Company Artistic Directors Taane Mete and Taiaroa Royal. The piece is set to alternative Christmas songs, including some from New Zealand musicians. The shows are playing at two venues this year – TAPAC Theatre from 2-6 December, and Mangere Arts Centre – Ngā Tohu o Uenuku from 10-13 December.