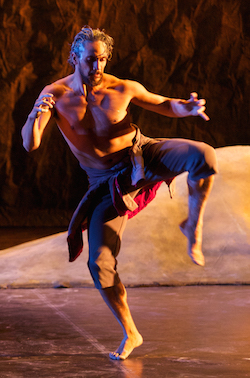 Blanco successfully auditioned for the National Aboriginal and Islander Skills Development Association Dance College before joining Bangarra in 2005, and has toured the world with the company performing in London, Paris, New York, Mongolia, Vietnam, and throughout Australia. Having just returned from an overseas tour with Bangarra, Blanco spoke to Dance Informa during rehearsals for the company’s production of Ochres, which opens on 27 November in Sydney.

Congratulations on winning the Australian Dance Award for Most Outstanding Male Dancer recently!  What were you doing when you found out you had been nominated?

“I was dancing! We were in the middle of our Lore national tour, so it was nice news.”

What does it mean to you to have your work recognized in this way?

“It’s nice to know I’m being watched and that my performances resonate.”

When did you start dancing, and what attracted you to dance?

“I started dancing in the womb. Dance is not attractive to me, it is a means of communication and a way of storytelling. Forget your high kicks, splits and So You Think You Can Dance moves and show us what you’re feeling inside. Tell us your story through the oldest and rawest form of expression.”

What have been some career highlights?

“Performing for our people on Country. No theatre, no bright lights, just the sea breeze and star lights – these are the most rewarding experiences.” 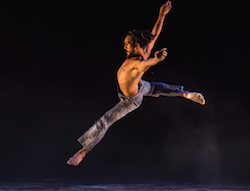 What would you be doing if you weren’t dancing?

“I would not be living if I wasn’t dancing. Dancing is innate in all of us, it’s something we learn to do before we walk. Dance chooses you.”

What do you think the appeal of Bangarra is to audiences around the world?

“With cultures dying out all across the world in exchange for Facebook and McDonald’s, I think Bangarra offers a glimpse into a world and a time when the land was worshipped and respected and we lived by the tides. Maybe audiences remember this and want a piece of that back.”

You can see Waangenga and Bangarra in Ochres at Carriageworks 27 November – 5 December. For full details and tickets, head to www.bangarra.com.au.