Natalie Weir’s whirlwind, tempestuous production of Carmen Sweet as performed by Expressions Dance Company will knock your socks off!

Using the Bizet music as a base (as arranged by Rodion Schedrin), this work seeks to explore three sides of the female character Carmen, the darker, the younger and the flirty. The company’s performance is extraordinarily strong and powerful.

Basically, Carmen Sweet follows the well-known Carmen narrative of jealousy and revenge. Carmen plays with the power she wields over the two men who vie for her affections before one kills her. Weir’s amazing choreography is at times aggressive, often slinky and other times, passionate. There is quite a bit of floorwork and some steamy, sculpturally entwining pas de deux, along with some death-defying leaps and catches. At times I was reminded of Graeme Murphy’s rather early works, such as Sheherazade.

The dominant colours of the minimalist staging are red and black. There is a black, glittery curtain and a Salvador Dali/Marilyn Monroe red lips sofa that is jumped upon, sat on, leaned over and used for some great pas de deux. This sofa almost has a voice of its own. 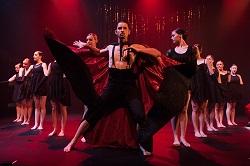 From the opening electric solo by glamorous Elise May, who is tall, red haired and in a sensuous black dress, we know we are in for a wild ride. Carmen is portrayed as vulnerable, but also dangerous and volatile. After May’s solo there is a dreamlike trio for all three Carmens with undulating arms. The other two Carmens, Michelle Barnett (who is more joyful) and Rebecca Hall (who is more seductress), give spectacular performances. They are dressed in similar, but not identical, red and black dresses. At various points, two of the three Carmens have various phrases of mirroring choreography depending on the mood and situation.

Jack Ziesing as Don Jose is terrific, proud and passionate. He appears genuinely in love with Carmen, whereas Escamillo is only using her as a means to an end.

Daryl Brandwood plays the fortune teller warning Carmen of her impending doom. He’s topless in a seemingly tattered, grey, swirling, trouser-like costume. He gives an eerie performance, forcing Carmen to watch as the murder of her younger selves is enacted.

Oozing machismo as the toreador Escamillo, Benjamin Chapman is in black with a swirling cape and bevy of adoring young ladies. He has a commanding presence and aura from the start.

Another fascinating scene is where Carmen transfers her affections from soldier Don Jose to matador Escamillo. It’s choreographed as a kind of sculptural ballroom dance for five people, yet dancing as one. The three Carmens become the middle of the group and with dynamic, mesmerizing changes of direction, the focus and outcome of the dance moves between Don Jose and Escamillo.

Carmen Sweet is undoubtably the most glorious, riveting production of Carmen’s famous tale, which is regarded as one of opera’s most iconic stories that follows a femme fatale.