The circus has been many things over the years, from the sawdust floors of travelling carny shows to the grandiosity of Cirque du Soleil, but have you ever thought of it as an agent of social and political change?

Since forming in 1978, Circus Oz has stood at the forefront of the animal-free, socially conscious circus revival. Having performed in over 100 cities and to more than 3.6 million people, the Collingwood-based ensemble is now taking on the behemoth of consumerism. 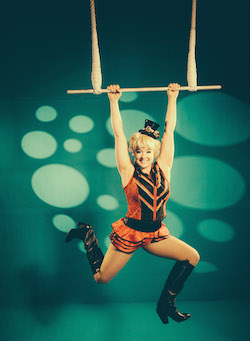 When their latest spectacular, But Wait … There’s More, lands in cities across NSW throughout October, they will be in full acrobatic satire mode. Yes, that’s right: satire. It’s an eyebrow-raising combination, and one that Touring Show Director Debra Batton explains thus, “It’s such a great form for having a serious issue shown to us in a way that makes us laugh or that lets us see it in a new way; and that’s what we’re doing with consumerism in circus.”

As a theme, it’s bound to strike a chord. Consumerism is at once habit, burden, pleasure and necessity. “We’re playfully looking at how much we all love the next thing, the new thing,” says Batton of But Wait … There’s More. “The funny thing, though, is that in circus an acrobat is always looking for the next trick. Whatever they’re performing, they’re training the next thing that’s harder, that’s better, or that they perceive as better.”

Indeed, Batton eagerly takes on the obvious conundrum that the show throws up for Circus Oz. “Often when a show is being performed, there’s another one being pencilled, and certainly circus is always looking for a new edge,” she admits. “Circus is absolutely part of the whole idea but, with this show, we’re trying to make ourselves and the community aware that there is a dangerous side to all of this, that we lose ourselves in what we want, or think we need, and that we can lose connection with the ‘bigger humanity’.”

Yet, for all that, the circus, like the dance company or theatre group, is an ostensibly cooperative venture. As Batton explains it, “We have work that is absolutely beautiful, where two people are working together and the interdependence and the relationship between them is necessary and quite apparent. So while we’re examining this idea of consumerism in a satirical way we’re also trying to show the opposite; that when two people connect and work together something amazing happens.” 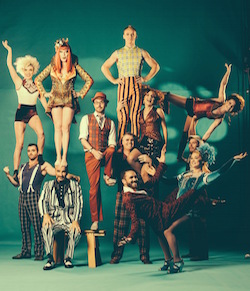 However, there is another question here; namely, how can you use physicality as a tool of satire, as opposed to the more direct medium of language? The clearest indication of that is the barcoding of all the performers. Audiences who have already seen the show have responded positively to this, and for Batton this is a sign that the show is achieving its objectives.

“We are very physical but, at the same time, the audience is very visual, because they’re just watching and getting a visceral reaction to the bodies on stage,” she begins. “This is about how the circus performer becomes a commodity in this culture. I mean, we ourselves are part of that vicious circle because we have to sell what we do. In the end, though, is it great that everyone becomes a barcode and a commodity? That’s the question we’re putting out to the audience.”

Whilst physical balance in circus is a must, the business of entertaining crowds also requires a certain balance. In this respect, Batton insists But Wait … There’s More retains the aspects of spectacle and acrobatic prowess that we would generally expect from Circus Oz. “It’s really important to us that there’s still this gorgeous circus performance going on,” she reveals. “We create an idea to launch the work from, rather than trying to make every moment in the show adhere to this idea; and that allows for some very interesting accidental connections that we discover in the process and that the audience discovers in the show.” 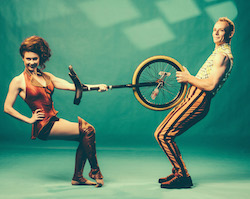 For an experienced circus, dance and theatre professional like Batton (Legs On The Wall, Magpie Theatre, Tracks Dance), Circus Oz has a very special culture. “I suppose it’s the egalitarian nature of the room when you’re working at Circus Oz,” she muses. “Y’know, as a director you’re just one of the bunch, you try and just push things along with everybody. The creative process doesn’t have that ‘this is the way it’s done’ thing. There’s always the possibility of invention.”

More than that, the company has progressive ideals in its DNA. Whether it’s their long-standing gender balance on stage policy or the socio-politics embedded in their shows, Circus Oz has always stood for something more than Las Vegas glitter and grand chapiteaux. “In some ways one of the things that’s still important to us is that there’s some subversive layers in the work that clearly offer a sense that the status quo can be challenged, that a lot of the things that we accept as unchangeable are in fact changeable.”

And so, as we consume the acrobatic wizardry of But Wait … There’s More, we know that our amazement will be augmented not only by satire but by the possibility of change. Now that’s a neat trick.