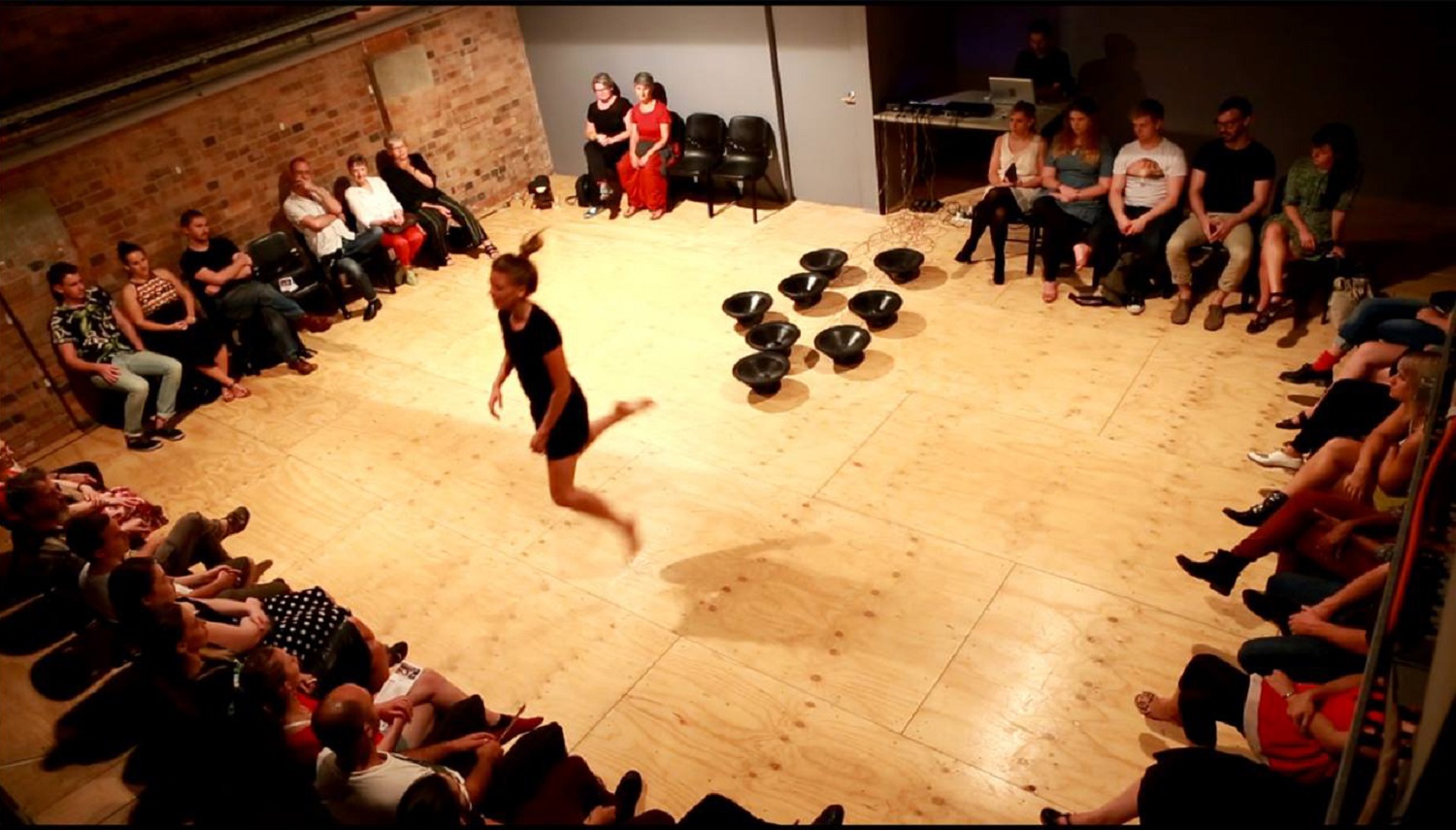 Two quite different, but in some ways complementary, works were presented as part of the Dancendents programme of events presented by PACT. Both solos were by female choreographers and they were each challenging and exploratory.

First was Rhiannon Newton’s Assemblies for One Body. Newton, who was involved in PACT’s Freshly Squeezed season, informs us that her proposition for Assemblies for One Body is “to watch what repetition does to dancing.” She adds, “Eventually I arrive to just a movement. This movement becomes something like an object, brought into the future by repetition.”

As the audience enters the theatre, Newton is already on stage and performing what at first glance seems to be improvised warm-up movements. For this work, the audience is seated on all four sides of the stage. Tan, the sound person, looms against the back wall, and there are six large speakers on the floor like an installation by Ken Unsworth or Joan Brassil.

Assemblies is roughly divided into three sections split by blackouts. At each blackout, Newton, who begins by wearing a few layers of clothing, removes a layer and eventually strips down to a plain, but elegant, black leotard.

A movement phrase is established then dissected, repeated and analysed, with Tan controlling the time fame between repeats. Eventually the timeframe becomes shorter and shorter between repeats, and Newton’s movements become refined to a single movement. In one blackout, Newton is caught in mid-flight. Sometimes the movement phrase is pared right back and then expanded again. 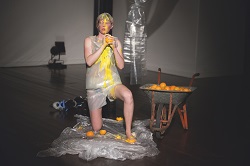 There are four movement phrases presented, each time Newton concentrating on a different section of the audience. Choreographically, Newton includes stretched, angular arms, lunges, a deep Martha Graham-like plie, a backwards walk, and ballet-like arms stretched out and crossed at the wrists, contrasted with swooping arm movements. While barefoot, Newton uses a balletic turnout of her beautifully pointed feet. The soundtrack at times has an ominous hum, or throbs, or hisses, building to a rumbling storm approaching, if not interrupted by the emphatic controlling beeps.

The second half of the programme was Leah Landau’s Summer Bone. This was harder to classify. Was it performance art, or dance, or something else? There was a real country/farm feel to this powerful hypnotic work.

For Summer Bone, the space was reconfigured to have the audience seated in layers of chairs on two sides of the stage. When we entered there was a curtain of clear plastic strips hanging prominently, and a wheelbarrow full of oranges, plus a pile of plastic clothing. Tall with sunburnt arms, Landau enters dramatically with large, looming shadows, dragging a very heavy bag of oranges, sort of Mother Courage like. She wears blue overalls and a large floppy hat. The hat is tossed and she ties back the clear plastic curtain, gentling the strips as if they were horses. The curtain then forms a proscenium arch-like effect.

The opening sequence of movements is a travelling jog-on-the spot with arms rigidly at the side of the body, as influenced by Irish/Scottish dance perhaps. Eventually there is a snakelike hum and a handclap on the soundtrack. Landau’s feet move contrapuntally to the soundtrack as she travels in a contrasting rhythm. This is repeated for a while. Then Landau’s arms eventually become loose and floppy and move as well.

Suddenly, there is a change to runs and lunges, a walk on demi pointe, the use of a deep Graham-like plie and kicks. With angular arms, as if Landau had become a horse perhaps, there is a delightful exploration of the freedom of space. Landau halts suddenly, strips and dons the clear plastic top and shorts, and places a plastic drop sheet on the floor. She then dons roller skates and slowly skates around in circles pushing the wheelbarrow full of oranges, coldly staring at us. Then she removes the skates.

For the final sequence, Landau eats several of the oranges, which we discover have been pre-prepared; the juice running down her body. She becomes covered in yellow paint, as if her body is a landscape or a canvas, painting her body as an object. The work is also about ‘The Art of Observing’ and ‘Being Observed’ as she stares wildly, yet blankly, at us the audience, who is of course looking at her.

In summarization, this is a striking and challenging double bill.

Mention must also be made of the wonderful short video you can watch by Flatline, A Dance for Paul Klee, as performed by Niharika Senapati at Bundanoon. Her body on the beach creates computer-scribbled red and black lines. The energy of her movement guides the art. Also, during the interval, there is the live performance by Todd Fuller, Carl Sciberras and Lisa Wolfe. Sciberras poses in white underwear while Wolfe draws on the shadows, ripples and energy of Sciberras’ movement against the wall. The finished product is then pinned to the wall for further contemplation. Fascinating!

Photo (top): Assemblies for One Body. Photo by Jennifer Large.