If you’re a Sydney-based dance teacher looking for ways to collaborate and stay inspired, look no further! Sydney North Public Schools Committee and Ballet Academy Northside have teamed up to offer professional development workshops for dance teachers in the public school system, with several other exciting initiatives to be organised in the coming months. 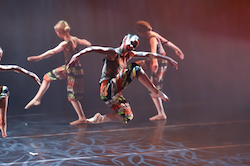 Kim, the Sydney Public Schools Dance Committee seems to be a driving force for a range of programmes aimed at helping both dance students and teachers. Can you tell us a little more about the Committee?

Kim: “This is my 30th year on Sydney North Public Schools Dance Committee. I’m actually retired as a teacher but that means I’ve got more time to give to it! The Committee is made up of teachers who are highly trained in or are interested in dance. They are involved in dance education in schools for year levels that range from kindergarten right through to year 12.

Apart from the Career Development Programme, we provide workshops for talented students and run a festival. In fact, our festival is the biggest of its kind in New South Wales. We have 92 schools involved, 180 items performed and we have 400-seat theatre in which we have 27 shows, and sell nearly 10,000 seats over 10 days.”

Wow! That’s very impressive. So tell me, how did the partnership between Ballet Academy Northside and Sydney North Public Schools Dance committee emerge?

Xanthe: “I was actually part of the public schools system when I was a student — I was a dancer in the Sydney North Public Schools Dance Festival and a student of HSC dance where Kim worked as a teacher. While I was dancing overseas I maintained my connections with Kim and was often invited to teach workshops for students when I came back. I then I moved back to Australia and took over the school from my former ballet teacher with Gregor [Gregor Thieler, Ballet Academy Northside Principal].

Kim thought it would be nice for the teachers to have a little more guidance and support and to have access to professional tools and guidelines. That’s when we decided to collaborate together to run workshops in our dance school through the Sydney public school dance under their name.

We’ve just started both workshops this year and they were a great success. We had over 60 teachers come to do the workshop and some great feedback!” 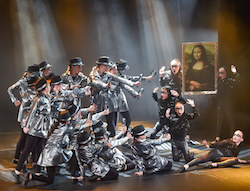 Kim, in what ways did you think these workshops could be used to help dance teachers working within the public school system?

Kim: “In the professional development workshops organised by the committee we actually tend to have specific sessions for primary school teachers and for secondary teachers. This is because most of the secondary teachers are trained dancers and have a degree in dance education while the primary teachers tend to be generalist teachers who have an interest in dance and often teach dance in schools as part of their everyday curriculum.

Our goal is to help teachers, particularly primary school teachers who often don’t have a formal background in dance, to understand that dance is more than just an execution of steps and belongs in the theatre as a performing art.”

What did you focus on during the first workshop you organised together?

Kim: “In the case of our first professional workshop, we catered particularly to teachers who wanted to create actual performances, either in schools or for our festival, so we really focused on choreographic skills.

One of the things we’ve often observed — and I don’t think this is just restricted to schools but also community dance — is that teachers can tend to rely too heavily on popular music or ‘top 40’ music for their routines, much of which can be inappropriate for young people – terribly sexualised and sexist.

We see dance as an art form, and we’re always concerned that people understand that with dance there is connection and communication with the audience, whether it be through ideas, images or emotions. At our workshops, we try to educate teachers about the variety of fantastic music there is out there upon which to create dance. At our festival, too, we insist that people who apply use songs that have lyrics and that they submit them to us for scrutiny to avoid that sort of thing.” 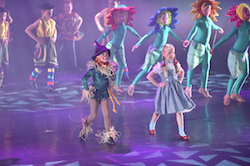 Newport Public School (Year 2 & 3) from their work ‘If I Only Had a Brain’. Photo courtesy of the Sydney North Public Schools Dance Festival.

Xanthe, what has it been like to train teachers in a system in which you were once a student?

Xanthe: “It’s been fantastic! It’s always nice to be able to pass on your own experiences having been a dancer yourself. I think the main reason we decided to do this programme was to give teachers inspiration. We want to encourage teachers to explore different ways of doing group routines and not feel like they’re doing the same thing every year, so it has been rewarding.”

I’ve heard that your workshops have sparked some possible future initiatives in public schools. Can you tell us more?

Xanthe: “Yes, I’ve actually been contacted by some schools to continue workshops in their school to help their students to develop not just their technique but also their improvisation and creative skills.

I think having a workshop is like the seed you plant to grow inspiration. I think they are very likely to become a regular occurrence, at least annually, possibly twice a year.

The teachers took away lots of tools from our workshop but the secondary teachers, most of whom have a degree in dance, also want to have some form of regular development, a regular class to develop their dance skills through a sustained professional avenue so we’ve been discussing that too.”

It sounds like Sydney Public Schools Dance Committee and Ballet Academy Northside will have much to organise in the coming months!

Xanthe: “Yes, it’s just a matter of finding a time that will be suitable for everyone! This will be easier now as the Dance Festival has just finished. The interest is definitely there though. The teachers agreed as a group that continuing this development in an ongoing capacity would be fantastic as it would give them the inspiration to offer their students a variety of different methods in the classroom and stop them getting too comfortable with their own teaching methods.

The secondary teachers, as we see it, will use our studios once a week during the term at night and they will have some financial support from the Committee, so that will help a lot.”

We wish you both the best with your many ventures in the coming months, Kim and Xanthe. To find out more about Sydney North Dance Schools Committee, visit www.snpublicschoolsdance.com.au. For more information about Ballet Academy Northside, go to dance-ban.com.au.