Imagine you are a ballerina working with the top choreographers, composers and writers of your time. They are creating a ballet specifically for you that will become a well known and loved classic performed all over the world for generations to come! I am sure Carlotta Grisi, an Italian ballerina born in 1819, could not have imagined having the title role of Giselle created for her and that it would stand the test of time.

Giselle was a triumph when it first premiered in Paris on June 28, 1841 at the Théâtre de l’Académie Royale de Musique. With enchanting music by Adolphe Adams, a romantic libretto by Vernoy de Saint-Georges, Theophile Gautier and Jean Coralli, and exquisite choreography by Jean Coralli, Jules Perrot and Marius Petipa, Giselle introduced a romantic story of a young peasant girl who discovers her lover is betrothed to another and dies of a broken heart.

Now, 174 years later, we can only read and see paintings of Carlotta Grisi and imagine her interpretation of Giselle. Through the rich history of the ballet, the spirit of Giselle made its way to Russia, where it continued to develop and mature into what we are able to witness at the ballet today.

In this production, Russian born ballerina Anna Samostrelova from the St Petersburg Ballet Theatre embraces us with her beautiful interpretation of Giselle. Act One shows her innocence and joy while she is falling in love with Albrecht (danced by Iurii Mirov, who’s skill did not match her technical strength and artistic quality.) Albrecht breaks her heart, which drives her to the famous “mad scene” ending in her death.

Act Two shows Giselle as a Wili, which are ethereal spirits of young girls who have died from a broken heart and avenge themselves by dancing any young man they encounter in the forest to death. Giselle’s self-sacrificing love for Albrecht leads her to forgive him and dances in his place before the Wilis, thus saving his life and in turn releasing her spirit from the Wili’s grasp. 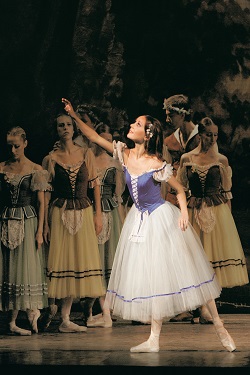 Samostrelova, in her role of Giselle, brought such beauty, strength and grace to her character. A celebration at the end of the grape harvest in Giselle’s Rhineland village features a delightful scene where a pas de deux is danced by Ludmila Mizinova and Anton Maltsev with such life and joy that it made up for some of the men in the background that looked like they couldn’t wait for the scene to end. Special mention must also be given to Iurii Baryishnikov, who never failed to capture you with his excellent facial expressions while playing the role of Hilarion, the jealous game keeper who is in love with Giselle.

Although I was looking forward to the entrance of the Queen of the Wilis as she typically floats effortlessly across the stage en pointe, I was disappointed. To my dismay, she did not traverse the stage in the way I hoped, but was revealed anticlimactically from behind foliage. However, my disappointment was short lived in the lacklustre entrance, because the Queen of the Wilis, with her two main Wilis, held perfectly balanced arabesques en pointe.

The Wilis in the corps de ballet held lovely formation throughout while dancing in unison. As dawn approached, the Wilis slowly disappeared, leaving us with a beautiful image of Albrecht lifting Giselle in an intimate embrace before she returns back to her grave and leaves Albrecht alone weeping. Giselle’s love had saved him!

The St Petersburg Ballet Theatre has a touring company of 60 professional ballet artists who have toured across the world. By popular demand, the company has returned back to Perth with two full-length productions, Gisielle and Swan Lake. It is a delight to have them return again to Perth and we hope they will return to us again soon!