When he was 18 years old, officially too young to enlist, Martin Raymond Butler begged his parents to let him sign up for the army to fight in World War One. While his mother refused, his father eventually consented to sign the papers. Butler made his way from New Zealand to the Battle of Somme, and tragically, never returned. 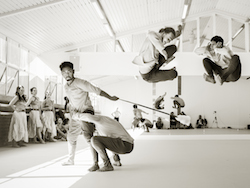 A century later, choreographer and artistic director Shona McCullagh took inspiration from her Great Uncle’s story to create a new contemporary dance work, Rotunda, on The New Zealand Dance Company. Honouring the 1915 Gallipoli landings, Rotunda draws upon the mighty courage and spirit of the ANZACs, and the women who, with shredded nerves and broken hearts, bravely kept their homelands running in the men’s absence.

McCullagh feels a strong personal connection to the ANZAC story. While her great uncle lies somewhere in the fields of Somme, her great grandfather also fought at both Somme and Gallipoli. He, however, survived the Great War and returned to New Zealand – but as a very different person.

“The war was such a brutal experience for many gentle men, and my grandfather certainly suffered enormously and was irrevocably changed by that experience,” the choreographer says.

“[Rotunda] deals not only with the loss of life, but also the loss of confidence and the ability to move forward in life after the war with any degree of mental strength.”

But the dance work does have a positive side. There’s a large focus on love, friendship, camaraderie and humour; an important part of how people survived the war. As much as it is about human darkness, McCullagh says, it’s also a study of human goodness, because she has to “believe that humanity is good.” 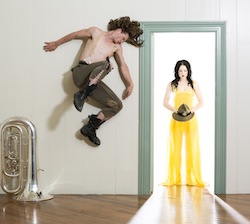 So far, Rotunda has really struck chords with audiences. It has received standing ovations at every performance across New Zealand and also at the Holland Dance Festival. This month, it comes to Australia for the first time, aligning with the Centenary of the Gallipoli landings.

A fusion of design, text, song, and choreography, Rotunda is performed with a 24-piece live brass band. While in its home country, the company has been touring with the New Zealand Army Band. In Australia it collaborates with local bands in each centre.

“The collaboration with the brass band has been totally stunning,” says McCullagh. “These are fine musicians and the score is just absolutely beautiful and powerful and deep and emotive and stirring and shuddering. It’s a fantastically rich score and the dancers have just loved that experience as well.”

An integral part of the creation, the unique score is a collaboration between musician Chris O’Connor, musical director Marc Taddei and composer Don McGlashan. The work “brings to life the world of the band rotunda, an iconic symbol of early 20th Century community where memories of loss and love are rekindled in a haunting snapshot of the joint history of Australia and New Zealand.”

Re-creating and expressing that moment in time posed a distinct challenge for McCullagh and her eight collaborating dancers. “Life then was so much simpler; the whole idea of the rotunda as a meeting space for people who had no other entertainment on a Sunday is quite a different paradigm to our lives now. It was difficult to find a way to create such a sense of innocence in a social structure.”

Presented by arrangement with Arts Projects Australia with support from Creative New Zealand’s Touring Australia Initiative, Rotunda celebrates and commemorates the ANZAC spirit and the themes of courage, loss, kinship and a desire for peace.

“We’ve had amazing responses from people who have been really inspired by both the dancers and the emotional content,” says McCullagh. “The piece begins with joy and ends with hope.”