Politics and ballet generally don’t live on the same stage; except of course when they get enmeshed in the strategic soft power games of the ruling clique. For Konstantin Tachkin, founding director of the globally renowned St Petersburg Ballet Theatre, the politics of pointe has straddled both Soviet and Putin era Russia.

Born in 1967, Tachkin was raised in the Soviet Cold War world. Indeed, he even served in the USSR’s crack parachute regiment. Now, as a world touring ballet impresario with two decades of rave reviews behind him, he has the perspective of a man who has lived half his life under socialism and half in the so-called free market. Given the particular significance of classical ballet in the greater Russian mindset, and its importance to the state as an international brand, it is a fascinating vantage point.

“For me personally the biggest change between the Soviet era and the one that we currently live in is that my ballet company is actually allowed to exist,” he explains with a wry grin. “During the Soviet era there was no possibility for an individual to start, let alone own, a ballet company. Cultural matters were very much under the control of the state. Painters, writers, circus artists, opera singers and ballet dancers all owed their existence and earned their living courtesy of the state.” 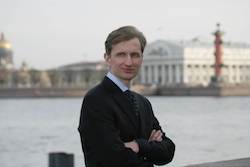 Although St Petersburg Ballet Theatre receives no largesse from the now capitalist Kremlin, the company does benefit from some cherished old Soviet era institutions. “It would be reasonable to say that without the continued support from our government for our iconic cultural institutions, like the Vaganova Choreographic Institute, my enterprise could not survive. I am able to fund and manage a ballet troupe but not a school as well. It’s the same for the Mariinsky. They too need these government run schools. No schools, no dancers.”

In addition, Tachkin & Co are able to travel freely; no small thing for a company that principally pliés its trade abroad.

Here again, Konstantin Tachkin is able to note differences and similarities between the two eras. “Every country considers its state supported companies as ‘calling cards’ that show off the depth of culture. The Soviet Union and now Russia are no different,” he observes. “Russia is proud of its ballet tradition. We are also proud of our great circuses and our opera companies. Maybe the times categorised Soviet Ballet as showing off socialist ideals; but in fact the ideals are not political ones.”

However, though the company receives no direct government funding, whenever they are abroad they “are always welcomed not just by audiences but also by our Russian diplomatic representatives.”

That ballet as a whole is an item of Russian pride is no great surprise, but what, if anything, do the great Russian classics say about their country and the culture from which they sprang? For example, is Swan Lake, (which the company will tour to Perth and Melbourne from early June), emblematic of its mother country?

On this Tachkin is more philosophical. “Maybe Swan Lake is only seen as fundamentally Russian because it is historically associated with our country, even though the story has its basis in a German fairytale,” he muses. “The Tchaikovsky score, so melancholy and so vibrant at the same time, is very Russian in character … but the beliefs and values? Well, of course, our Swan Lake has most often shown the eventual triumph of good over evil and this ending was the preferred Soviet ending; but did that say something perhaps about the ideals of the time?” 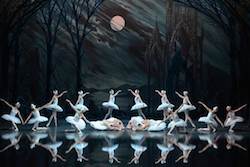 Regardless of ideology, the St Petersburg Ballet Theatre version of Swan Lake is classic Russian spectacle. A fifty strong company, lavish costumes and opulent sets prevail. Driven by Tchaikovsky’s score and based firmly on the choreography of the both Marius Petipa and Lev Ivanov, the production is avowedly traditional. As Tachkin quips, “If it’s not broken, why change? Same with most of our other ballets. We strive to show ballet as people imagine it to be: gorgeous dancers, beautiful music, tutus, pointe shoes and traditional sets. Let those with millions of Roubles of government money do the experimenting.”

What this means for audiences in 2015 is a taste of pre-modern Russia. “Tradition. Russian tradition. Russian soul,” Tachkin pronounces. “Oh, and you just have to see our prima ballerina Irina Kolesnikova. She is a true prima.”

Exactly what this says about Ms Kolesnikova we shall leave to the imagination; but there is one thing that seems fairly sure. When Swan Lake reaches our shores it will sell. As Tachkin gleefully recalls, “Where else in the world can you see such huge audiences? A simple example: in 2013 we made a two week visit to Perth following our extensive South African season. We sold a phenomenal 13,000 seats.”

Yet there remains one seat in Australia that Konstantin Tachkin would like to see occupied. “To my shame I have not seen the Australian Ballet,” he confesses. “But I do believe that this year we’ll be in Melbourne at the same time as they are doing their Cinderella. I should go and see it. Of course, it will be good because it’s choreographed by Alexi Ratmanski; and he’s Russian.”

For more information and tickets to Swan Lake by St. Petersburg Ballet Theatre in Perth and Melbourne visit www.st-petersburg-ballet.com. The company will also present Giselle in Perth only.