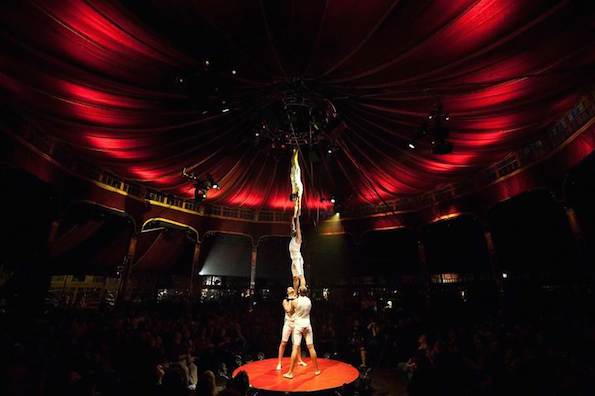 The crazies from Las Vegas have moved the tent down under, and the antipodean Absinthe tour is a kind of homecoming for Spiegelworld’s Aussie producer.

Maybe you have to be a gazillionaire to understand, but the buck has to stop somewhere. This time it’s on a New York sidewalk, waiting for a ride to the lower east side.

That Australian entrepreneur Ross Mollison should be off to see another show is no surprise. The NY based impresario is the man who employs the many hundred artists and performers required to create and sustain a long running, ensemble juggernaut like Absinthe (which is currently showing in Newcastle, before touring across the country). As the man behind the global success of Spiegelworld, of Empire fame, he is always looking for the next amazing act to bring into his travelling bohemian circus of burlesque vaudeville.

“Luckily the circus world is populated with artists who are extremely disciplined,” Mollison dryly observes. “They’re like dancers, their body is their temple and they look after themselves and they work extremely hard. Y’know, so that helps.”

It does indeed; because Absinthe has clocked up well over 1,500 shows and is currently cavorting its way into its fifth year at Caesar’s Palace in Las Vegas. “But we’re constantly improving the show,” Mollison declares. “It’s not like a play where the director opens it on opening night and that’s it, it’s done. This show gets looked at every week.” 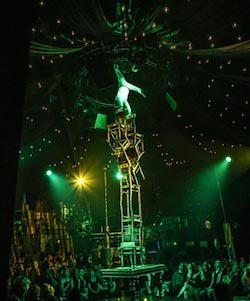 The Spiegelworld caravan has been redressed for the Australian tour of Absinthe. Indeed, Mollison tells us, he’s just got back from Vegas where he was running the rule over the first ever parallel bar and high wire acts to feature in a spiegeltent setting. Of the former all he can manage to say is, “This act will just blow you away.”

Aside from the hype, there is always the 700 seat tent. Based on the original Belgian and Dutch ‘mirror tent’ designs, the modern ‘spiegel’ phenomenon has tapped into a broad based audience taste for nostalgic, lo-fi pleasures. “We look at the tent as being the set,” Mollison explains. “Whereas most entertainment is two room theatre; y’know, you go and sit in one room to watch other people perform in another room, in our world everyone is in the same room. So we try to do things that you might normally do in a circus but do them in a super intimate location. I think that might be why people love it so much.”

With Absinthe however, the flavour of the nostalgia is more exotic. Based around the boozy adventures of the Gazillionaire and his sidekick Penny Pibbits, Absinthe is a whirling, multi coloured spin of dancers and acrobats. An irreverently lurid and jaw dropping world.

“Part of the attraction is that absinthe itself was banned,” says Mollison of the show’s namesake tipple. “Y’know, and that gave it a kind of mythic quality.”

All of which sat perfectly with the original vision of the show. “We loved it as the name because the active ingredient, wormwood, led to hallucinations amongst those who over-consumed. So we thought, ‘well, imagine a show where you have a little sip of absinthe and all of a sudden you’re standing in a transformed, magical world.” 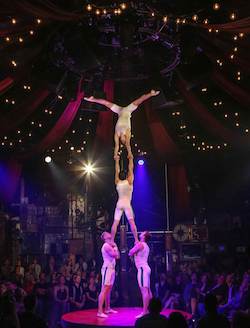 Sitting in the back seat of his cab across town, Ross Mollison speculates about the bizarre and almost legendary life of the show’s garrulous host, The Gazillionaire. Poached from Cirque du Soleil, clown Voki Kalfayan plays the sleazy Armenian salesman with particular relish. As Mollison attests, “He’s out every night until dawn usually. Drunk or carrying on. Actually, I think that’s why he’s keen to get out of Vegas. It’s not a good town to be a raging alcoholic.”

Drink induced delights notwithstanding, Absinthe stays true to some of the most basic entertainment principles; the most obvious of which is that we still love to see other people put life and limb at risk for our amusement. “People love it,” Mollison enthuses. “Whether it’s Nik Wallenda walking on a wire across Niagara Falls or whatever, it’s as old as circus itself. Older really. People taking an enormous amount of risk creates an enormous amount of suspense. It’s really nerve wracking to see these guys climb on top of each other while balancing on a chair and walking a wire.”

For a man like Ross Mollison the risk of grand adventures like Absinthe are not so much anatomical as financial. From the lights of Vegas to Times Square and the rooftop at Crown in Melbourne, Spiegelworld has sought to dazzle and inspire – not to mention, make a few quid and keep everyone in food and rent (and tents).