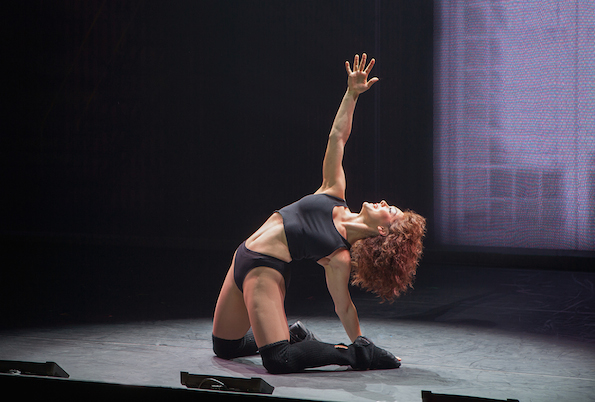 Melbourne native Karli Dinardo, 20, wasn’t alive when Flashdance debuted on the big screen in 1983. However, the Australian triple threat is a big fan of the iconic film and feels ept to tackle the lead role in its musical adaptation.

“Regardless of my age, I’ve watched the movie many times,” Dinardo says.

She groups it with other classic dance flicks of the 80s in her collection: Footloose, Fame, Dirty Dancing, to name a few.

The film grossed over $150 million and its soundtrack received a Grammy Award.

Familiarity aside, Dinardo says what really drew her to the leading role of tough-as-nails Alex Owens is her perseverance. In the movie, Owens works in a steel mill during the day and dances in a bar at night. But she harbours dreams to attend a renowned dance conservatory and become a professional dancer.

“Alex is a fighter who has a dream and decides to achieve it, even though circumstance keeps pushing her in the opposite direction,” Dinardo says. “She decides to bite the bullet and go for it.” 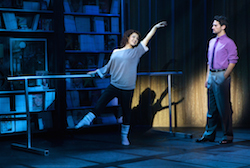 Karli Dinardo and Adam Rennie in ‘Flashdance – The Musical’ in the US. Photo by Chad Bremerman.

Dinardo can relate to this. “I had a dream and, despite challenges both small and large, I moved to New York City at 17 to pursue it,” she adds.

At 3, Dinardo began dance lessons. Several years later, she started competing and says her dance trajectory “escalated pretty quickly after that.” Throughout high school, she trained at competitive dance schools in Australia, including renowned Patrick Studios, then relocated to Manhattan to attend the Integrated Conservatory Program at The American Musical and Dramatic Academy (AMDA).

“I’ve always known that this is what I wanted to do,” Dinardo says. “It was never really just a hobby.”

From the screen to the stage

This iteration of Flashdance the Musical debuted in Pittsburgh, Pennsylvania on Jan. 3, 2013.

Dinardo says the musical’s storyline follows the movie’s. Iconic imagery, such as the water scene, off-the-shoulder sweatshirts, and legwarmers, are all heavily incorporated. And  it features popular tunes from the film: like “What A Feeling,” “Maniac,” “Gloria,” and “I Love Rock And Roll.” The musical’s leading lady does point out one difference between the screen and staged versions though.

“Tom Hedley [who wrote both the movie and stage musical], went back and fleshed out some of the other characters’ storylines more,” Dinardo says. “It gives the show even more heart.”

In addition to the hit songs from the movie, composer Robbie Roth and lyricist Robert Cary created 16 new tracks for the musical — all very much inspired by pop music of the 80s. 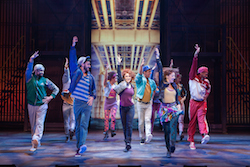 The company of ‘Flashdance – The Musical’. Photo by Chad Bremerman.

Yet, dance is at the core of the show, and the choreography encompasses a wide range of styles — from classic ballet and jazz dance to breaking and hip hop. Sergio Trujillo is behind these moves as the show’s director and choreographer. Dinardo says she was impressed by Trujillo’s passion for what he does.

“It was an absolute honor getting to work with Sergio,” Dinardo says. “His specificity and attention to detail is incredible, and his energy is very inspiring. It makes you want to give 180 percent all of the time.”

Dinardo says one of the most different aspects of playing Alex Owens is the stamina. Being onstage almost the entire two hours — eight performances a week — can be draining physically, emotionally, and mentally.

Another challenge in playing Owens for Dinardo is keeping her Aussie accent at bay. While she studied an American accent at AMDA, Dinardo says her Australian inflection does slip out from time to time in rehearsals.

“Little Aussie things will come in, especially with Adam [Rennie], who plays Nick Hurley, being Australian too,” Dinardo says. “But someone always catches it and makes sure we fix it for next time.”

Her favourite onstage moment is the audition scene at the end of the show. 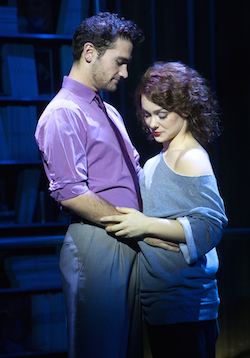 Karli Dinardo and Adam Rennie in ‘Flashdance – The Musical’. Photo by Chad Bremerman.

“There’s something very special about it for me,” she says. “By that point, it’s been a two-hour marathon and I’m very emotional. It’s liberating to do that final solo to ‘What A Feeling.’”

She is also amped up by her fellow cast members, who watch this scene from the sidelines, sending her support and encouragement to push through these final moments.

After success overseas, there’s some speculation about whether or not the musical is bound for the Great White Way in New York City. But Dinardo is unable to substantiate any rumors.

“Regarding Broadway, we know about as much as anyone else,” Dinardo says. “But I certainly hope it does go at some point because it really is an amazing show.”

For now, she’s simply enjoying the opportunity to bring the show to cities across the U.S.

“Telling this story to enthusiastic audiences and getting to perform with some of the most wonderful people is very rewarding,” Dinardo says. “It’s a dream come true.”

The stateside tour of Flashdance the Musical will hit 40 cities in 2015.

For more about the new touring musical, visit FlashdancetheMusical.com.