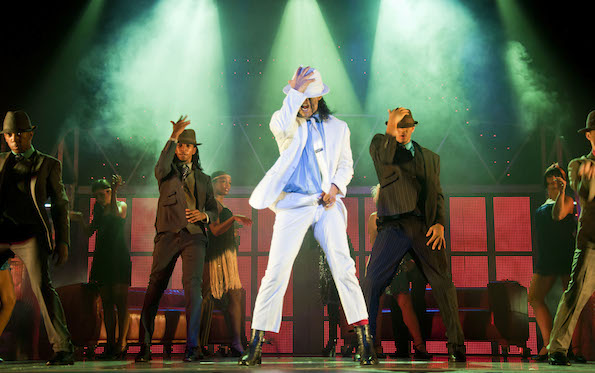 With the hit West End musical Thriller Live set to sizzle down under this summer, Voice finalist Prinnie Stevens gets ready to step back onto the boards.

In the dance universe we are used to hearing about the Bauschs, Balanchines and Baryshnikovs but there was one untrained dancer out there who most likely influenced and encouraged more dancing than any of the traditionally big names. His name: Michael Jackson.

Whatever we may think ‘critically’ of him, Jackson’s influence is apparent in everything from Beyonce videos to SYTYCD auditions. It’s a stream that runs through hip-hop, R&B, funk, soul, disco and all the way to FM pop. Record sales, copy-cat acts and tribute shows are testament to MJ’s sustained pulling power.

In this context it’s easy to see why Thriller Live has just entered its seventh year on the West End and why it’s coming down under this summer.

No wonder the show’s newest cast member is so excited. Cue Prinnie Stevens, trained dancer, singer and staple of ‘reality’ shows like The Voice and Celebrity Apprentice. “I remember seeing Michael when I was really, really young and he stepped out of this spaceship and just stood there for five minutes,” she recalls.

Stevens will be one the five singers and sixteen dancers who will embody Jackson’s formidable back catalogue and dazzling moves across a spectacular two hour show. “He ruled the charts in pop, rock and R&B, so it’s hard to find one person who could sing all those genres,” she explains. “Also, his range was so incredible that we need both male and female singers to be able to pull it off.”

As someone who began her training at age four, Stevens is well placed to understand the choreographic side of the MJ phenomenon. “There’s something about Michael that teaching cannot give you,” she observes. “If you see him at nine years old his dance moves are so intricate and so fast.”

With influences drawn from Chuck Berry and James Brown, Jackson brought something new and enervating to the limited palette of pop dance. As Prinnie Stevens notes, “It all kinda derived from the gospel scene; so it’s like gettin’ in the spirit. Michael took something from that and also from soul music and brought it into pop music and into his dancing.”

Recalling the rigours of her own lifelong training, Stevens adds, “His moves were not textbook. I think he broke almost every rule. He stood on his toes in a pair of shoes. He did things that made every dancer think again; and it all came from his heart.”

In the context of a high octane show like Thriller Live, in which she will both sing and dance, the issue is not one of technical difficulty but energy. Whilst admitting that many of MJ’s moves are relatively easy, Stevens injects a note of caution. “I’m able to be a trained dancer but then throw all that away,” she states. “You have to be able to not think about the technical side of things. You can’t pull up and find your centre when you’re doing this kind of thing. It’s totally different. It’s all by feel.”

As she prepares for the show’s antipodean tour, Stevens reflects not only on her training and the wealth of musical theatre know-how she has garnered since bursting onto the scene as a seventeen year old in Rent, but on the very essence of live performance. “We work so hard with singing and dancing over all of the years with all of the training but once you’re on stage you have to be able to let go of that and feel. If you’re too focused on that stuff it doesn’t read. So that’s something that Michael taught us all.”

Thriller Live will certainly give her the chance to put this into practise. The show celebrates four decades of MJ, from being the cute kid in the Jackson 5 to the more controversial and contradictory adult of later years. Songs like ABC, Rock With Me, Billie Jean and Bad and, of course, the signature ‘moonwalk’ are all part of the story. It’s a mix that has recently seen the show enter the top twenty ‘all-time longest running West End musicals’ list.

For Prinnie Stevens, however, it represents a move away from her recording and ‘reality’ careers and back to her roots. “It will be a challenge going back to eight shows a week but it’s what I know and what I’ve always done,” she says. “I was a Brent Street kid when I was ten, so I guess I just know what it’s like. Yes, it’s a challenge but y’know, it’s just in you.”

Almost certainly, this is a sentiment that Michael Jackson himself would have echoed.

WIN TICKETS TO THRILLER LIVE IN MELBOURNE!
Dance Informa has 3 Double Passes to give away for the Opening Night of Thriller Live at State Theatre, Arts Centre Melbourne on Wednesday January 28. Just email info@danceinforma.com with your name, date of birth, phone number and postal address and tell us your favourite Michael Jackson song and why. Entries close January 10.