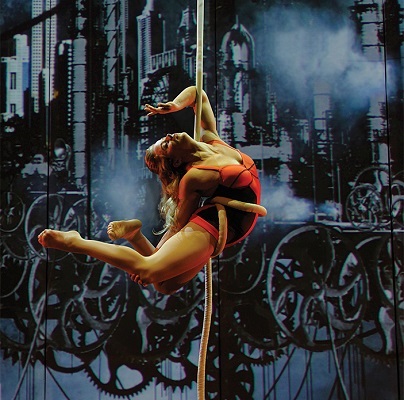 Cirque Éloize’s Cirkopolis was a delightful treat that left the audience pining for more at Sydney Opera House on opening night.

Underpinned by its innovative nature, Montreal’s Cirque Éloize explores issues of humanity and theatricality through the forms of circus art, dance and music, resulting in a tasteful display of visual poetry.

The multidisciplinary troupe is made up of 12 talented and technical performers, with diverse skills ranging from Chinese Pole to Banquine and teeterboard to juggling to the German Wheel to contortionism and dance to trapeze to hand to hand to the Cyr Wheel (a large metal hoop where the acrobat maneuvers the wheel from inside) to straps and clowning.

Delectable and daring, each act out did the other. The straps artist, Ugo Laffolay of France, delivered a handsome performance demonstrating control, flexibility and endurance as he lifted himself up into the air, twisting and contorting his body from one position to another with flawless transitions. Canadian contortionist and trapeze artist Myriam Deraiche elegantly took the stage, demonstrating grace and beauty with her naturally long limbs and gifted flexibility. Although some linking steps and balances were questionable, her male partners maintained a delicate manner in their partner work.

Such gentle and seamless partnering was executed in simplistic, yet visually interesting, choreography, which was accompanied by a dreamy piano score. A group of male dancers were laid on the ground in a circle, creating a path with their hands as Deraiche lightly strolled across. This continued as they peeled around and repositioned at a higher level in a cyclic motion until they were completely upright, allowing her to finish above head height supported by one foot in a perfect 180 degree side split.

Such grace was matched by sheer muscular fortitude by a group of male performers who demonstrated coordination and control on and in the German Wheel. Jaw-dropping acts performed on the Chinese Pole left the audience gasping for air and applauding after each trick. 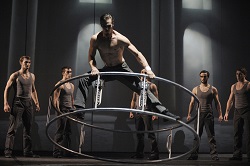 Each act was well polished, grounded and perfectly timed, which effectively drew the viewer into the fantasy world in which Cirkopolis had created. For those looking closely, only a few transitions jolted the viewer back out into reality.

The stylistic thread throughout each act was inspired by the 1920s. Subtleties of the era were found in the costumes. Others were found in the moments interjected with swing music and dancing, all enveloped with Cirkopolis flair.

Grey, silver and tainted green graphics of the industrial movement were simultaneously projected onto the backdrop, creating the juxtaposition between the fanciful world of the 1920s and grit and weight of the industrialized reality. Transitions in and out of each scene were splashed with colour, not only with the textures found in the lighting design and dynamics in the music, but also through the humorous clowning, which effectively received a great reaction from the audience.

Cirkopolis embraces the power of imagination through the expression of the human body. It was the journey of one’s mind in the pursuit for identity in this world and the fascination of allowing one’s inner child to come alive and explore the world of dreams. Nevertheless, it allowed one to just exist and be elated.

The entertaining and awe-inspiring Cirkopolis only stopped in Sydney for a short time. However, it remains an award-winning circus spectacular for all ages.