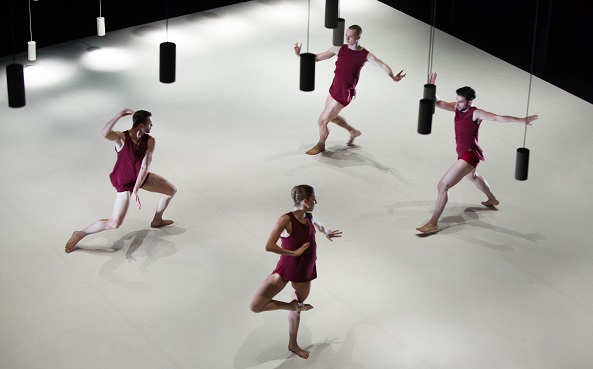 Scattered Rhymes, created by Bonachela, was inspired by Petrarch’s poetry, which consequently explores the sentiment and response of unrequited love, both the euphoric highs and the reversal into despair. Together with the company, Bonachela explored the concept of these notions to create movement phrases and sequences that represented the energy found in such sentiments. Furthermore, a particular focus was directed to the moments in between the highs and lows, where a mutual adoration resides.

Each theatrical element added to the layers of interpretation. As a result, Bonachela’s collaborative work evidently displayed: reflection, deliberate arrangements and precision in its final delivery.

Each duo, which interjected the larger group choreography at the beginning, middle and the end of the piece, conveyed unique dynamics found in the space of adoration. One duo in particular, Thomas Bradley and Petros Teklis, managed to place their own interpretation of the sentiment into the intensity of the movement, implementing a magnetic like force, whilst remaining true to the choreographic direction.

The other sections that were comprised of larger groups were deliberate and orderly. The spacing allowed the dancers to break out into scattered canons and then progressively align in sync. The movement was fast, intricate and technically placed, allowing the dancer no room for error. While breaking in and out of cannons is a choreographic technique recurrent in many of Bonachela’s works, perhaps thematically in this piece, it represented the moments that interject reciprocated synchronicity.

The costume design of simplistic red leotards allowed the dancers to move at the speed required, and certainly exhibited the precision in their technique and extensions, whilst the lighting design complemented the muscular and sculptured bodies of the dancers. Moreover, the lighting design, by the way of projected white laser lights, created new spaces on the stage, which permitted the dancers to exist within the world they were expressing.

Overall, whilst thematically and theatrically all the elements were meticulous and the dancers were technically fluid and flawless, there was, however, an underlying sense of detachment towards the spectator. Nevertheless, the dancers delivered a superb performance with Alana Sargent being the standout of the evening. Scattered Rhymes was certainly polished and executed at a world-class level.

The second part of the evening presented Parenthesis, the fresh, electric and energetic piece created by Andonis Foniadkis.

Parenthesis explored the notion of interaction with one other and with others in a larger group. It focussed on the duality that exists within an exclusive relationship and the external interactions that may include spiritual, religious or philosophical influences that consequently disrupt the equilibrium.

Extremely physical and engaging, this work featured original scores by French composer Julien Tarride, which produced a powerful and driving force with a classical undertone and a continual commanding beat.

The pulse of the music, along with the choreography, pushed the dancers to new levels, maximizing their full potential and requiring extreme stamina. It was revitalizing to see the Sydney Dance Company dancers air bound. Daring, chaotic and highly athletic, the dancers covered all areas of the stage with Charmene Yap being lifted, tossed and pulled from one end of the stage to the other.

There was an essence of tribal dance in certain unrestrained movements. In particular, there were moments where the dancers moved from a grounded angular second position and repeated the movement in the air. Fluid yet powerful, the choreography was sporadic, momentous and deliberately wild. The dancers appeared liberated in this new style and moved freely in the costumes specifically designed for them.

Renowned Greek (but German born) fashion designer and photographer Tassos Sofroniou’s costumes incorporated defined shapes and outlines to represent harsh discomforts of certain interactions. The juxtaposed softer fabrics he used balanced out the harshness with sinuous undercurrents. It was refreshing to see colour on the dancers and costumes and shapes that exposed different muscles groups, which therefore fashioned proportionate illusions and worked in harmony with the movement.