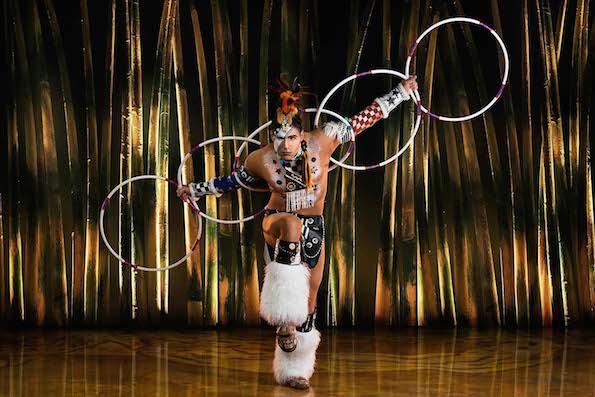 A Spotlight on Cirque’s Eric Hernandez

If you were ever going to consider dropping out of college to run away with the circus you could hardly choose a better big top than the famous, globe-trotting blue and yellow grand chapiteau of Quebec’s Cirque du Soleil.

Thus it was for a young Californian born sociology student named Eric Hernandez. One day studying hard, the next packing his bags to tour the world with Cirque’s latest juggernaut, the Robert Lepage directed spectacle Totem.

However, rather than being a straightforward ‘plucked from obscurity’ story, Hernandez’s 2011 switch from undergrad to seasoned circus performer came via a curious collision of the ancient and modern. Cirque casting had seen Hernandez on youTube performing a traditional Lumbee Indian hoop dance.

“I was shocked at first,” Hernandez recalls. “I was just studying and certainly didn’t have any plans to join the circus but I kinda just picked up and ran with it.” Three years and more than 750 shows later, he and forty four other acrobats, dancers and singers will land in Australia for yet another Cirque summer down under.

For Eric Hernandez though, the real beauty of the story isn’t so much about his own trajectory as the hoop dance and the Lumbee culture that underscores it. Though born in Covina, California Hernandez’s ancestry traces back to the North Carolina based Lumbee tribe. It is from this deep well that the hoop dance has been drawn.

“I learned the dance from my uncle when I was about ten years old and I’ve been doing it since then,” Hernandez explains. “It’s a traditional Native American dance that tells a story about the different plants and animals and how they relate to humans; and that kinda ties it in with the theme of Totem.”

Created by legendary Canadian film and theatre director Robert Lepage, Totem is ostensibly about the theory of evolution. It tracks human life from primordial ponds to the sky and places our journey within the broader context of nature. Much like Ovo (which toured here last summer) and their much touted Avatar tie-in, Totem continues the emerging Cirque tradition of taking circus into ‘green’ fields.

It is this simple idea – that humanity is still very much of this Earth, rather than simply upon it – that gives Hernandez’s hoop dance its particular relevance. “This is something that First Nations really have as a priority; y’know, the importance of nature, that we need it to live with it and that we ought to take care of it. In a way, for us, nature is kinda everything.”

The hoop dance itself is a traditional wedding ceremony. According to Hernandez, “The hoop kinda represents the wedding band. In the show it appears right before the roller skaters, who are in a wedding scene, so for me it’s kinda cool that the dance has retained its true spirit in the show.”

As it is for indigenous Australians, so too many Native Americans consider that the wider sharing their particular cultural practises is vital to keeping them alive. “When I learned the hoop dance from my uncle he always told us that it’s not what you know, it’s what you share,” Hernandez reveals. “He always made us feel really proud about sharing our culture, and teaching people who we are and where we come from. So it really means a lot to me to go on stage every night and show people. Most people won’t have seen it before so it’s great to be able to share it on such a large scale.”

Of course, scale is something that Cirque du Soleil specialises in. Totem has already clocked up over three million ticket sales since its 2010 debut. Cirque’s well-oiled spectacle machine, which maintains several concurrent touring and residential shows, has not only revived the circus but helped to weld together the disciplines of dance, music and acrobatics in a way that satisfies not simply the aesthetics of the family friendly arena but the genuinely artistic and philosophical ambitions of creatives like Totem’s director Robert Lepage.

For one time sociology student and proud Lumbee descendant Eric Hernandez, it has also been a ticket to the world. “We get to perform for thousands of people every night and I can get to share this dance and this culture that I’ve been doing since I was a kid with the whole world,” he enthuses.

On the eve of his first trip to Australia, (where he says he expects to be confronted with “poisonous spiders and kangaroos”), Hernandez is now very much part of the Cirque du Soleil furniture. Indeed, he seems more than keen to pull back the curtain, revealing that the organisation’s loudly espoused eco-consciousness has indeed translated into some kind of action.

“I think Cirque du Soleil is really focused on that,” he declares. “I mean, even just being involved with Totem, I can tell just how serious they are. On tour we all recycle. If you’re ever out back in the staff kitchen you’ll see it, there are recycling bins everywhere and everyone tries real hard to remember that we’re using up finite resources and that, y’know, we oughta be careful about that.”

Totem opens in Sydney on October 28, before touring to Melbourne, Brisbane, Adelaide and Perth.
For tickets and info visit www.cirquedusoleil.com/en/shows/totem/default.aspx