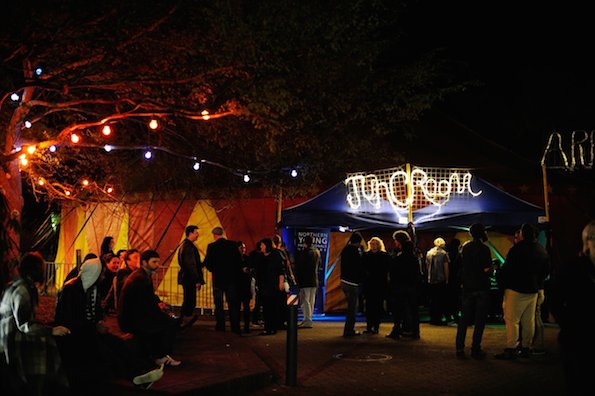 This month, the Tasmanian town of Launceston will host an innovative five-day arts festival, one in which dance will help to breakdown all kinds of barriers.

When Natalie De Vito transplanted herself from the bustling Canadian metropolis of Toronto to the relative quiet of Launceston in Tasmania she was not thinking tree change or retirement. Indeed, she brought her passion for participatory, site-specific live art with her and helped to create the annual five-day Junction Arts Festival.

In September 2014, Junction will once more break out of the black box and collapse the fourth wall with a range of innovative events, including Ordinary Moments Of Extraordinary Bliss (which invites local families to create and perform a cabaret together), Climate Change Karaoke (with its bicycle-powered karaoke machine), and Abigail Conway’s Time Lab (which asks audience members to dismantle an old watch and fashion a piece of jewellery out of it.)

It is a programme rich with genre-busting invention, one that could easily grace the festival calendar of a big city. However, De Vito insists that Junction is a great fit with its host town.

“Launceston is geographically amazing,” she says. “Not only is it in a beautiful part of the world but it has a very concentrated CBD that’s very workable. It’s also got one of the highest percentages of original settlement buildings, so it provides a really good space to create new works. Y’know, coming here, where it’s a small but mighty town, you realise that you don’t need to be in a big city to make an impact.”

In the mix of this surprisingly worldly regional festival the dance programme stars, not least because it is an artform that is by its very nature participatory.

“They certainly all fit within the overall intention of the festival,” De Vito explains. “A few of them perform on different levels. The On Dancefloors piece for example, which is by Abigail Conway, although it is a dance work she really operates in the visual arts, live arts scene, so she’s bringing something really different to the idea of dance.”

The Junction dance roster includes a “hip-hop ritual” from Cypher, a “dance meditation” called Close Your Eyes And Focus On Your Breath from emerging Launceston choreographer Zeke Guest, and the highly participatory shake out of No Lights, No Lycra.

As Junction’s artistic director, Natalie De Vito is especially fond of No Lights, No Lycra, which literally kills the lights and dismisses the pressure of performance, allowing the audience to move with absolute freedom.

“It’s a really lovely piece that allows for a complete disregard of all the awkwardness or embarrassment or self-awareness that you hate about dance classes. It gives you that freedom to dance however you want and still experience that same sense of dancing together with a group of people, but without the visual aspect,” she says.

Elsewhere, things get more intimate. Conway’s aforementioned On Dancefloors is a live choreographic installation, where individual audience members join the UK-based artist in a small space for a private dance.

As De Vito says, “There are a number of works in the festival that provide varying degrees of ‘relationships’ for audience members. So, the one-on-one dance performance with Abigail, where you get to choose the song and you go into a room and she’s dancing there and it’s up to you to what degree you interact with her, is one extreme of that.”

At the other end of the spectrum, and perhaps more pertinent in the context of regional Australia, is the urban dance event Cypher. As it does in cities, youth street culture also creates its fair share of alarm in smaller towns, and Launceston is no exception. Performed in a ritual circle, it invites audience members to take part in the “battle.” For De Vito, it’s all about altering preconceived ideas.

“Street culture performance is a rigorous, disciplined, athletic thing. These guys really work at it in a very disciplined fashion,” she argues. “Y’know, there are always issues around what you might call your ‘anti-social behaviour culture’, which is probably more obvious in a small town, so for me some of these performances become opportunities to provide the potential for significant social commentary and, y’know, maybe change people’s perceptions.”

Viewed in this context, the deliberate blurring of the artist/audience line that sits at the heart of the Junction Arts Festival is as much about a broader attitudinal shift as it is about bending the rules of performance.

“It’s about non-traditional spaces and activating the city in a very different way,” De Vito declares. “We’re really inviting audiences to come here to Launceston and really use the whole city as a venue and as a playground.”