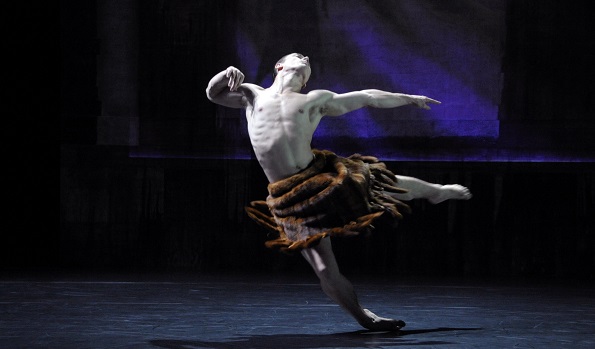 When controversial choreographer Meryl Tankard returns to Australia to remount her serendipitous interpretation of Stravinsky’s Rite Of Spring, she will bring her past, present and possible future with her. Cue The Oracle.

Igor Stravinsky’s much loved (and loathed) Rite Of Spring has fascinated and confounded critics, audiences and choreographers alike since it made its literally riotous Paris debut in 1913, when Diaghilev’s Ballets Russes, with the legendary Nijinsky at the creative helm, shocked their patrons with a dangerous story of pagan ritual sacrifice.

Since then, Rite has been interpreted by ballet and contemporary companies the world over, including Pina Bausch’s Wuppertaler Tanztheater and, more recently, Michael Keegan-Dolan’s Fabulous Beast. Most have tended to use ensemble casts to recreate Stravinsky’s violent pre-Christian motifs. Meryl Tankard is breaking that mould.

When she returns to Australia in August to remount her international hit The Oracle she will do so using just one male dancer. It may sound like a risky and surprising creative venture but for those who recall Tankard’s tenure as the Artistic Director of the Adelaide based Australian Dance Theatre (ADT) this will come as no great shock. With works like Furioso and Aurora Tankard marked herself out as a truly forceful auteur, one unafraid to ruffle the feathers of convention. Since her controversial departure from ADT in 1999, she has created works for the Australian Ballet, Lyon Ballet, Nederlands Dans Theater, and even Disney.

However, even for someone as adventurous as Tankard, Stravinsky’s notoriously ‘difficult’ score represented a challenge. “It was not something I ever wanted to do,” she says frankly from her base in the south of France, “because I had danced in Pina Bausch’s Rite Of Spring and it was a masterpiece.”

Indeed, the origin of The Oracle owes more to serendipity than particular ambition. Tankard was working in the studio with Australian dancer Paul White and her partner and set designer Regis Lansac, when she stumbled upon the idea of working with the Rite Of Spring. Inspired by a book she had about the painter Odd Nerdrum, she asked White to create a sequence based on the idea of an earthquake. Later that day, while she and Lansac were reviewing video of the piece, Tankard suggested they try and match it to Rite.

“We could not believe it,” she recalls. “We fast forwarded Paul’s body by about six seconds and it looked like we had created a dance to that piece of music. And that actual piece remains in the work to this day.”

As much as the complex rhythm of Stravinsky’s music represents a challenge for the choreographer, it also creates issues for the dancer. Fortunately, Tankard’s collaborator Paul White is one of this country’s foremost dance artists and a man of rare creative and athletic ability. “What was interesting was that I had danced to that music so many times but when I was working with Paul’s male body – and of course the sacrifice is female – it just made me look at it and hear the music in a completely different way,” Tankard explains.

Using just four elements (a heavy velvet cloak, a bonnet, a pair of underpants and a fur stole) Tankard and White set out to recreate the maelstrom of the pagan ritual. “So with the clothes I tried to make Paul become all the characters. At times it felt like there were hundreds of girls on stage, so I was able follow the story of the maidens preparing for the spring festival.”

Whilst this might be a cosy and inexpensive arrangement for a director and a performer, there remains the reality that The Oracle is a show; and one that needs to keep an audience engaged. This is where full length solo works sometimes test the concentration of the auditorium. For Meryl Tankard the desire to keep the piece “pure and minimal” whilst maintaining the dynamism of Rite’s narrative meant that the lighting and Regis Lansac’s visuals were more than usually critical. “I always feel that it’s not a solo that you could do justice to in a studio because Paul really dances with the light; and that’s really powerful because it creates this force around him.”

Clearly, the artistic choices that Tankard, Lansac and White made have served them well. Since its 2009 Sydney premiere, The Oracle has toured extensively and been showered with accolades. Adelaide audiences will doubtless be hoping that the work retains its freshness and vigour, despite it having being performed dozens of times over five years. It should therefore please them to note that its creator is still tinkering. “There’s a very strong structure but, y’know, those fine little details, little nuances that you can still get more out of, I still have notes for Paul about them.”

White’s virtuosity, Tankard’s vision and Stravinsky’s arresting score aside, there remains one obvious curio about The Oracle. Why Oracle and not Rite? Here again the paintings of Swedish artist Odd Nerdrum provided the springboard. His large canvases are frequently rich in allegorical and apocalyptic imagery, often setting people in desolate landscapes.

As Meryl Tankard says, it’s very much about humanity in the context of nature. “I just thought it was appropriate because the oracle was someone who derived their power through nature, who could foretell the future because they would hear it in the birdsong. Y’know, the birds would tell him that there was going to be a storm or an earthquake. So I just thought that there was this connection to the earth that we’ve lost now and I really wanted to bring that out.”

Of course, this is underscored by the fact that dance, (along with drumming and singing), is the most primitive and elemental artform and one steeped in ritual. The power of The Oracle, although augmented by the modern inventions of choreography, theatrical staging and orchestral music, stems from the notion of one man alone and ultimately naked in a world that will eventually kill him. In this, it is as much about our ever present mortality as any lucid dream of the future.