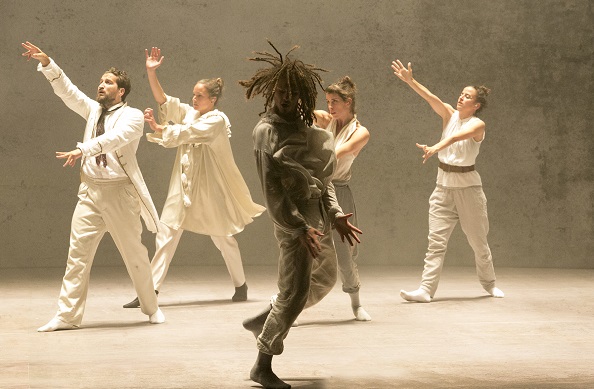 Sun is the masterpiece of Hofesh Schechter, a choreographer who is now based in the U.K. but was born and raised in Israel. He has an international profile now after a meteoric rise in the U.K. over roughly the last decade, and he recently co-directed the Brighton Festival.

At the start of the work in its recent Sydney season, a voiceover informs us repeatedly that Sun is about light and dark, white and black.

There are many layers of meaning throughout this deep work. Death in this work is always lurking. There is the wolf killing the sheep, and other stories are told using large plywood cut-outs that also form the figure of a murderous coloniser shooting helpless indigenous people, and representations of the modern killings we read about globally every day. The baddies eventually become a contemporary banker and a young person in an obscuring hoodie. The skipping sheep with their beautifully pointed feet and silly little scampering jumps are at first cute then eventually become annoying.

Philosophy and truth are important. The work is about politics and freedom. There is an emphasis on colonization and slavery and the mistreatment of First Peoples. The use of darkness also emphasises our feeling of being vulnerable. There is a long blackout at the start, then “We thought we’d start by showing you some of the ending” explains the ominous voiceover, “so you know it’s all going to be fine.” Dressed in white, the dancers suddenly appear and exuberantly weave through frieze-like celebratory steps to Wagner. The lights are suddenly switched off and rewind to the beginning. There is possibly a Cunningham/Cage influence with the fragmented use of time, counts and rhythm, etc. 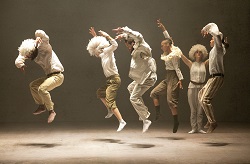 It is also about the ‘Sun’ – as in the planet – which is represented by a gold ball shining on a white cloth at various points. Choreographically, Shechter includes an ever-changing mix of sources from folk dance to militaristic marching to the controlled and graceful softness of ballet to contemporary angular gestures all skillfully blended and dynamically performed. There are courtly twirls, amazing balletic leaps and Tharp-like backward lunges. Certain phrases of movement are repeated. Two halves of the ensemble at times do separate moves that end up neatly dovetailing together. Technically, the dancing was more than superb, fluid and graceful. The company performed with overwhelming, inspiring energy throughout.

Lee Curran’s lighting includes blinding, snappy blackouts and also features a massive hanging grid of light bulbs, which comes on in a blaze of white or in swirls of moving light. There is also much use of dry ice. The audience is assaulted by overly loud music, which is an eclectic mix of world music including bagpipes, African, Western classical, Jewish, a much loved hymn, and others.

Shechter’s Political Mother, which was seen in Sydney now several years ago, was a knockout experience. Sun is completely different – far less coherent, more “bitty’ and fragmented. It sure gave rise to lots of thought provoking discussion by the audience afterwards.