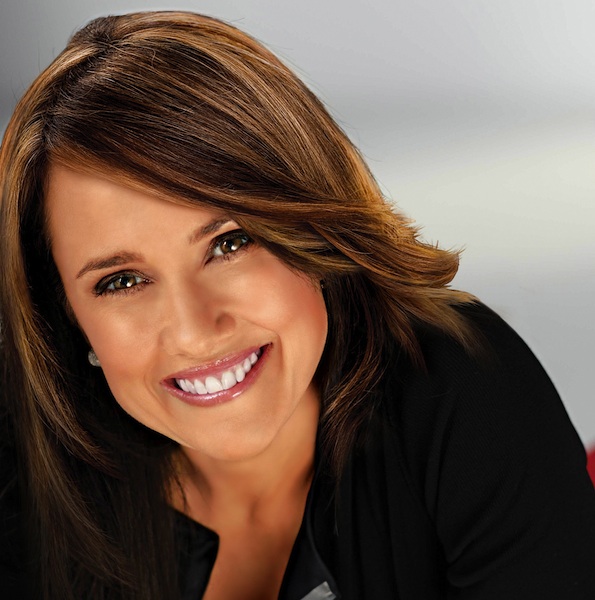 In this interview with Dance Informa, Chris speaks of her hopes for the organisation, her admiration of Sydney Dance Company’s Charmene Yap and her own life-long love of dance.

Congratulations on your new role as patron of FORM Dance Projects, Chris!

“Oh, thank you so much! I’m really excited about it. Although my dancing days are long behind me, I still love the art form. I still wish I could do it, but my 47-year-old body isn’t playing ball unfortunately!”

You are best known as a News anchor and host of Sunday Night on Channel 7. How did you end up getting involved with FORM?

“In the past year, I’ve joined the Twitterverse — reluctantly at first I admit, because I’m a bit of an old fashioned fogey, though I enjoy Twitter now — and I re-tweeted a couple of things for FORM. I grew up in Western Sydney and I like to support people who are doing incredible things there, plus I also love dance and had heard of FORM. One of the producers at Sunday Night, his wife Annette, as it turned out, was basically running FORM, so she rung me and asked me if I would think about becoming FORM’s ambassador. I said, ‘Sure, but you need to know that I’m also the ambassador for various organisations in Western Sydney, including a rugby league club and I don’t know what the arts community will make of my interest in sport!’ Luckily, Annette wasn’t bothered by my manic support for the Parramatta Eels! And for me, it was a real no-brainer.”

What first sparked your love of dance?

“Well, I basically grew up dancing. I was in kindergarten at school and one of the girls in my class stood up for ‘News’ and said that her mum was a ballet teacher. Apparently, I then went home and told my mother that I wanted to learn ballet — next thing I knew, I was doing lessons in a double garage in Greystanes in Western Sydney.

That was in the seventies, and I think we did ballet, tap and jazz. Then when I was at high school, I changed dance schools to a place in Parramatta called Wendy Greenaway School of Dance and did R.A.D. classical ballet. I ditched the tap and kept doing jazz and character and things like that.”

What kind of a dance student were you and how would an organisation like FORM have benefitted you?

“I would have absolutely loved to have been a dancer, but I had flat feet and no turnout. My teacher said she needed to break my hips and start again. [Laughs.] I could turn though… I could turn for days [Laughs.] I was told I had good arms and reasonable musicality, so I could probably have gotten away with things from the waist up, but from the waist down I was a horror story!

What I like about FORM is that they’re offering something different to the traditional approach of auditioning for a ballet school, going in, doing class, rehearsing and coming out the other side. Whether you’re a dancer or choreographer, a videographer or a young dancer coming into your own, FORM offers a whole skill set rather than just a rehearsal, and I think that’s fantastic. As a dancer, you’re generally really specialised, you don’t have industry networking skills or know how to market yourself as a business. FORM offers both kids and professionals those sorts of opportunities.”

How do you hope to help FORM in its aim to promote opportunities for dancers?

“Well, I’ve got a pretty big mouth for starters. [Laughs.] But seriously, as you know I‘ve got a national profile through Sunday Night and through the 7 network, so hopefully I’ll be able to raise some awareness about FORM and what it’s achieving through those channels. And possibly by doing that, we might be able to persuade state governments that perhaps a bit more performance space for an organisation like FORM would be beneficial. Particularly when you’ve got a heritage building sitting in Parramatta that was actually considered for an arts space by a previous state government but has since been shelved. Hopefully we can put on a bit of pressure to say to politicians, ‘Hey, you really need to think about this.’”

Why do you think it’s so important for an organisation like FORM to exist?

In Western Sydney, we have 186 different languages and lots of people from different cultures with rich dance traditions. FORM is bringing them together — the Indian community, the Afghan community, the Tongan community… to me, if you can bond a community together like that, then it’s an immeasurable benefit to governments and to cities.”

You’ve done many things with your life and, of course, with Channel 7… what keeps you returning to dance?

“To be honest, for me, it’s pure gob-smacking admiration. I will sit there and watch Charmene Yap from Sydney Dance Company with my mouth open, gaping at what she can do, you know, and I’ll drag my sports-crazy husband along and say to him ‘Now I know that you love going to the Olympics and covering football games — if you want to see incredible precision and athleticism, you are coming to watch this girl.’ [Laughs.] So it’s people like her who inspire me.

I remember years ago, when I was young, I went to a dress rehearsal of The Australian Ballet. We all turned up wearing buns, of course, hoping that Maina Gielgud would turn around and go ‘Oh my gosh, where have you been?’ Sadly, that never happened. [Laughs.] Watching people like David McAllister though, watching his career and seeing what an inspiring dancer he was when he was in the company that he’s now running… what a marvellous bloke he is and what he’s achieved — I find it really inspiring.

For some stupid reason, even now, when I go to see Sydney Dance Company, I try to get through a dance class. It brings a smile to my face to dance, it doesn’t matter how terrible I am. It’s just the pure job of moving to music that keeps me coming back to it… even if I now pay for it in spades the day after!”