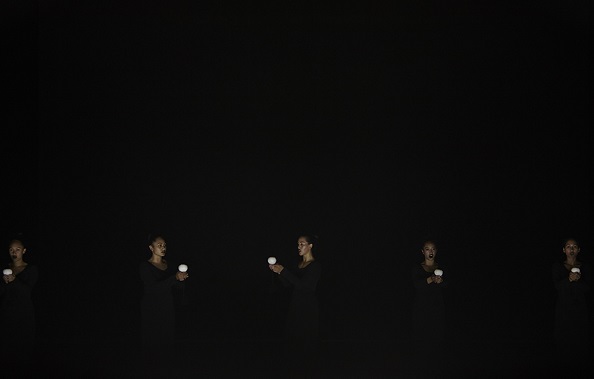 Dark, mysterious and challenging, Stones in Her Mouth was an extraordinary piece from the company that brought Bird With Sky Mirrors previously to our shores. It was a riveting, intense, and in some ways overwhelming experience.

Blending chant, rhythmic poi, oratory choral-work and dance, Lemi Ponifasio and his company of ten magnificent performers gave us their hearts in this outpouring of grief, for what has been and is being done to New Zealand’s environment and people. There was a huge sense of the heritage and the oral history of the Maori people.

The performers were in simple long black dresses and had delicate Maori tattoos around their mouths. The title of the work, based on poems collected and written by the cast, warned that this was not going to be ‘light entertainment.’ Instead, it was in some ways spiritual with the performers being in almost a trance like state, it was anger inducing, thought provoking and moving. There was a huge impact through measured walking and small gestures included in the work which at times gave it a Butoh like feel. There were also some soft, eerie jumps included repeated in patterns and a possible Graham-style influence.

Some of the other highlights included a mysterious naked woman with a gold blood-red cross inscribed on her body like a crucifix, engulfed in spasms of rage and grief. An impressively dignified kneeling woman, singing to break your heart as a baby cries a little, was in the background. Both reflected the idea of loss and sacrifice. Then there was a line of warrior/goddess women, staring down the audience, their deadly whirling precise poi like a relentless drum beating the rhythm of time. The soft, yet snappy, whirring sound,  blurred–in-movement and almost futuristic sight of the poi in perfectly synchronised, tightly choreographed segments towards the end was sobering. 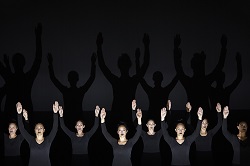 Mau ‘Stones In Her Mouth’. Photo by Zan Wimberley.

While the overall effect was very dark, there were subtle variations of grey included, and sudden bold verticals that ignited the imagination with the help of Helen Todd’s dramatic, atmospheric lighting. The creation of the black hole set required fluorescent strip lighting up front on the floor, which at first was blinding, but I became accustomed to it. Similarly, the electronic beeps and burps that popped up occasionally through the performers’ singing could be annoying, or enthusiastically accepted.

The performers’ impassioned chant in the Maori language was hauntingly beautiful and at times quite overwhelming and scary. Most of the performance, however, was more concerned with a relatively quieter spirituality that examined the Maori culture, family, and their use of ritual and myth. At the end it was as if the performers were goddesses vanishing into the sea, arms raised in farewell, or benediction and blessing?

Part dance, part performance art, part concert. This was amazing and packed a huge emotional punch in an understated yet spectacular performance.