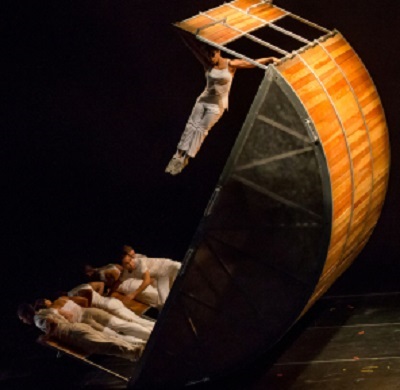 Los Angeles company Diavolo Dance Theatre bought to the Arts Centre their own brand of spectacular, exploiting the idea of big for all it was worth; big sets, big sound, big energy and big concepts.

In the two works presented, Transit Space and Trajectoire, Jacques Heim and his company of extraordinarily skilled performers set out to tackle large scale concepts including feeling lost, finding a sense of purpose and the transcendence of the human soul against all odds. Unfortunately, it felt as though in trying to create a truly larger than life experience, nuance and subtlety, particularly in the choreographic choices, were forsaken for a constant “wow” factor, leaving me feeling sensorially stifled and confused.

The first work, Transit Space (2012), was made in consultation with LA based skateboarders and featured an unrelenting spoken word composition, which included a barrage of over emoted pieces of text layered on top of a hybrid big beat hip-hop meets 90’s nu-metal score. Although it’s a staple of the company to follow no narrative, the blatant use of text felt as though it was a band-aid solution to delivering concepts of feeling lost, discovering identity and coming together, without properly investigating how these could be conveyed through choreography.

That said, the performers were undeniably skilled, virtuosic movers and executed the highly physical choreography with great precision. Akin to the traceurs and traceuces that epitomise the art form of parkour, their movement was fearless yet utterly controlled.

Their interaction with the captivating skate-ramp-inspired set was flawless and very much added to the sense of risk and urgency underscoring the choreography. Borrowing again from the parkour technicians of the world, whose practise is rooted in pushing body movement to its limits to overcome psychological and physical obstacles around us, an urban undertone was cultivated through all aspects of the work. This left me wondering whether the comfortable, traditional proscenium-arch theatre was an appropriate choice for the staging of such a work. I was also left wanting more from relationships between performers, which were under-developed and hard to define. Although the “coming together” portion of the concept was well represented, the more intricate psychological struggles of humans in a landscape of “ever-shifting physical and emotional spaces” were casualties of spectacle.

The second work of the evening, Trajectoire (1999) was choreographically somewhat more fulfilling, with the utilisation of the rocking vessel-like set bringing to the fore once again the performers undeniable ability. The playing with the weight of the dancers bodies in order to manipulate the speed and incline of the surface of the structure was both daring and effective, particularly so – the spectacle of bodies flying through the air and expertly weaving in-and-out of the large structure.

After the first 15 minutes however, the movement vocabulary started to become monotonous and the integrity and investigation into the choreography of the individual dancing bodies was overshadowed by the manipulation of the set. “Ebb and flow”, were clearly represented in the constant pendulum of the structure creating peaks and troughs for the dancers to negotiate, however the relationships between the dancers and the vocabulary of their bodies was confused and failed to provide any insight into “a voyage of destiny and destination” or “the transcendence of the human soul against all odds”.

Trajectoire, however, did possess two of the only interesting lighting choices throughout both works with the backlighting of the sculpture revealing dancers not only on top but inside which created powerful and symmetrical shapes; and finally, my coveted moment of quiet came, albeit at the finale of the evening, when a single dancer was left silhouetted sitting a top the large sculpture staring out into the distance.