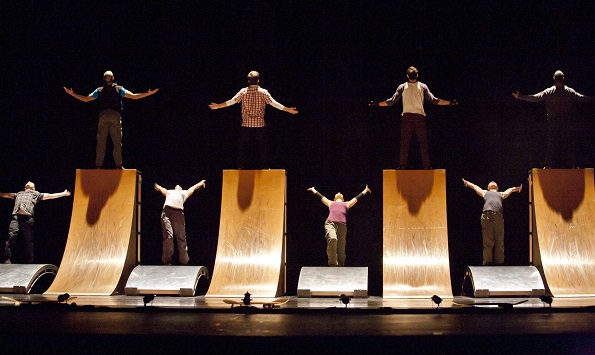 Gone are the days in which dance is neatly labeled: ballet, modern, jazz, social, contemporary. While this evolution makes it a challenge to give words to a dance experience, it also opens up the possibilities for choreographers and directors, and creates interesting dialogue around an art form with few platforms. Diavolo Dance Theater Artistic Director Jacques Heim isn’t afraid to delve into this realm of indefinable dance. His work is an amalgamation of many dance forms and theatrics, all the while giving emphasis to structure and central themes.

In February 2014, he brings his robust LA-based dance troupe to Arts Centre Melbourne. For its Australian debut, Diavolo presents Architecture in Motion, which highlights two of Heim’s works that reflect his choreographic voice, collaborative style, urban influences and desire to explore raw human emotions and desires.

Even after 15 years of touring nationally and internationally, Heim says presenters have a difficult time describing what Diavolo does. So, over the last five years, he has started to redefine the company, giving it more depth than the descriptive “acrobatic dance company.”

“What we do is architecture in motion,” he says, which is also the title of the Melbourne show. He likens himself to an architect more than a choreographer, explaining that the structure and themes come first. Heim works closely with sculptures, architects, composers and other artists to map out the physical structures; these, in turn, affect the lighting and mood of a piece. Only after these conversations does Heim start to look at what human interaction and emotions bring to the big picture.

General themes of Heim’s work range from human struggle and condition, to fear and danger, to chaos, order, disorder, destiny and a variety of other concepts that can speak to a broad audience. The movement, a fusion of dance styles, materializes through collaboration with all 10 dancers in the company. Collaboration actually saturates the entire creative process.

For the company’s Melbourne appearance, Heim presents two starkly different pieces: Transit Space and Trajectoire. Helm describes Transit Space as a “long poem,” mixing the vocals of spoken word artist Steve Connell with a “rock-n-roll-esque, U2-like” score composed by Paul James Prengergasdt. Heim infuses elements from his past and the Los Angeles skateboarding culture to create a true transient space. Atop skateboards, the dancers ricochet off moving vertical ramps.  Yet, the piece is about so much more than skateboarding.

“The theme is about feeling lost and wanting to belong to a group, community or family; it’s about wanting to have a purpose in life,” says Heim. He speaks about growing up in Paris in a divorced family. A self-proclaimed rebel who was thrown out of six schools, Heim says theater and dance became his salvation, a conduit for pent-up frustrations.

Explaining how he came upon the skateboarding culture in 1993, shortly after he moved across the Atlantic, Heim draws analogy between skateboarders’ yearning for community and sense of belonging to the feelings of loneliness explored in Transit Space. “As soon as they [get on a] skateboard, they have a sense of freedom and purpose,” says Heim, aligning this to his own sentiments surrounding art.

Created in 1999 and finished in 2001, Trajectoire is a “metaphor about the balance of life,” according to Heim. He adds, “It is about destiny, destination and how they manage together to be balanced.” The dancers navigate a large, rocking galleon, which is in a constant state of motion. It challenges their balance, literally and metaphorically.

From the lyrical, lithe movement of Trajectoire to the edgier, acrobatic moves required for Transit Space, Heim says his dancers have to do it all. “It takes a different kind of dancer…to be in this company because each piece is completely different,” he says. Expressing gratitude for his roster of versatile dancers, he credits them for creating the meat of the choreography via multiple improvisation sessions.

Hesitant to put parameters on his work and labeling it into a specific dance category, Heim acknowledges he is not the only director pushing the choreographic envelope. “I don’t pretend to be doing everything new,” he says. “But there is something interesting and a different angle about this work.”

Perhaps dance no longer needs explicit definitions, giving choreographers like Heim license to create across multiple mediums as they see fit. He offers the possibility of viewing the work in different venues than a proscenium stage, like an art gallery, observing the pieces like “abstract live paintings.” However viewers prefer to consume their art in the 21st century, Heim hopes they’ll engage with his work, exploring it and experiencing it in a way that makes sense to them.