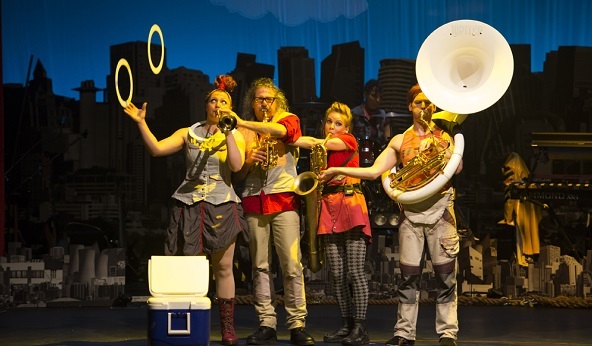 Circus Oz flipped their way into the New Year performing their most recent show Cranked Up located at Sydney’s Tumbalong Park in Darling Harbour.

The audience waited with anticipation as the Big Top buzzed with excitement and filled up with interesting personalities, including Cirque fan celebrities. Chatter silenced and the show began.

Act One opened with a series of upbeat jazz tunes played by the live stage band. The construction landscape was set. Industrial beams intact. Overalls pinned. Hard hats were on. Performers were ready. The city skyline lit up and the scene came to life.

Acts were fabricated around and within structured building sites as artists were spun, swung, thrown, and caught, disappearing and emerging from every area opportunity presented.

The stage was continually evolving, creating new environments. At one moment in time, the grand piano that was being played live had an acrobatic pole prop that emerged from within the center. Moments later, one of the characters ‘Mason’ appeared from within the piano. He mounted the pole displaying extreme technical strength and acrobatic skill whilst it swayed from side to side. Simultaneously of course making it look effortless with comedic flare. Further along in the show, the piano was then played live whilst hanging from the ceiling. It was quite the theatrical spectacle indeed! 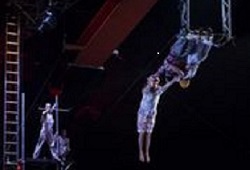 Characters such as Dale, or aka Dez, flaunted his fabulous male mullet and incredible good looks as he strutted across the stage striking a pose here and there.

Pocket sized performer Stevee, is known for having more frequent flyer points than the average traveler. Keeping in mind that this is due to the fact that she was tossed and thrown across the stage through the air in just about every act, not to mention every show, and held a high standard of technique and continual energy throughout the evening.

There were trapeze acts, jugglers, tumblers, clowns and even tight ropewalkers on suspended steel beams. Certain sections were a little underwhelming for an opening night with loose transitions, jugglers loosing their props and mediocre landings.

However, the golden act appeared in Act Two; a mesmerizing aerial drumming sequence. A circular centerpiece formed by various drums and mystically lit, hung mid air. Starting in stillness and silence, each beat gradually merged together one beat at a time that composed a clannish fusion. ‘Bec’ the artist sustained continual rhythmic tempo as the showpiece swung side to side. As the drumming captivated the audience, gorgeous contemporary choreography was displayed below, immersed with progressive acrobatic floor work.