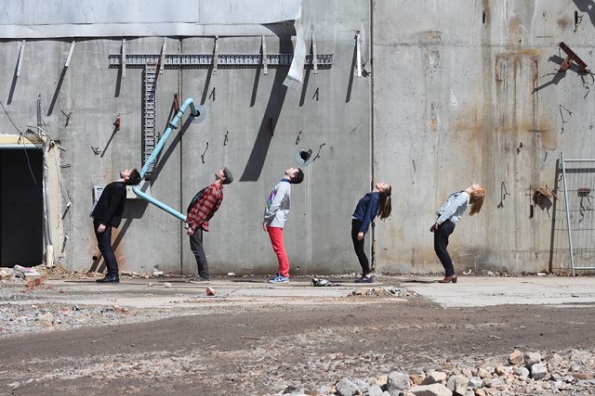 Ask anyone what their favourite aspect of a given experience was and so often you get the answer: the people. Whether studying, working or traveling, it’s the relationships you build that can be the most rewarding and have the most long-lasting benefits. The class of 2011 at Victorian College of The Arts (Dance) realised this; they felt that the bond they had developed throughout their training could transition into the professional realm. Not content to wait for work to come to them, they created a collective called “Menagerie.”

Comprising some of Melbourne’s most skilled young dancers and choreographers, Menagerie is “a collection of varied thoughts, practices and ideas,” says dancer and publicist Jonathan Homsey. The ultimate aim of the co-op is to create a flexible and supportive platform for creating work, professional development and networking.

Following a creative development period in 2012, Menagerie was thrilled to become artists-in-residence at Kensington’s Revolt Artspace. It is there that, over the past eight months, the collective have been working on their brand new triple bill, Fractious.

“We knew we wanted to have our triple bill in an space that could be immersive for the viewer,” says Homsey. “The malleable layout was the perfect canvas for Menagerie to create Fractious.”

The upcoming production explores what it means to be fractious – an adjective that the collective can relate to.

“We wanted something that embodied our experience and process,” explains Homsey. “Being an emerging collective with many opinions and ideals is an intense atmosphere. However, if you take that intensity and put it in a productive way, a show can happen. Fractious means to be unruly. We took our fractious eagerness that all young artists have and used it as a vessel to fuel our work.”

Each work in the triple bill investigates different aspects of the word, including the physical, the emotional and the political.

Rachel Heller-Wagner’s Crumbs explores the internal monologue of self-identity through personally distinctive solos and duets. Timothy Walsh experiments with how an audience can experience something by solely witnessing in Remind Me Again in 24 Hours.

The third work on the bill is a commission by Next Wave 2014 artist James Welsby. Inspired by the scandal involving persecuted musicians Pussy Riot, The Riot Hustle explores the political turmoil of Russia through “an eccentric fusion of pedestrian movement [with] contemporary and vogue choreography.”

“Each choreographer had a different development process,” says Homsey. Walsh “devised tasks that brought the performer to an out-of-body state or trance, through cycles of repetition.” Concerned with the idea that people are composed of many particles, Heller-Wagner, for her part, has dissected movement into idiosyncrasies.

Welsby’s research process involved “connecting with the Menagerie dancers, getting to know them and challenging them to think about the political climate in which they make art.” Together, creator and dancers researched the punk band Pussy Riot, folk dance and voguing, then applied their findings in unusual ways, creating an “outcome original unto itself.”

“We hope audiences will take away the visceral experience [of] the triple bill,” says Homsey. “Contemporary dance is typically not narrative based, but based on the sensations evoked from the performances.”

Welsby adds, “I’m hoping to engage my audiences with fictional folk dances and imaginary cultural traditions, which will hopefully prompt them to reflect on their own authentic traditions and where those traditions sit in the power structure of historical context.”

In between creating Fractious, Menagerie has had a number of other creative projects the artists have been working on. They choreographed a work for the Australian Choreographic Competition and have also developed a dance film, Foiled Again, which will be shown at December’s Short + Sweet Dance Festival. With no funding for 2013, Menagerie is grateful for the assistance of Revolt.

Go along and support these talented and energetic young artists! Fractious plays at Revolt Artspace, located at 12 Elizabeth Street in Kensington, on November 7-9. To book, visit menagerie.org.au or call Revolt Art Space at (03)93762115.