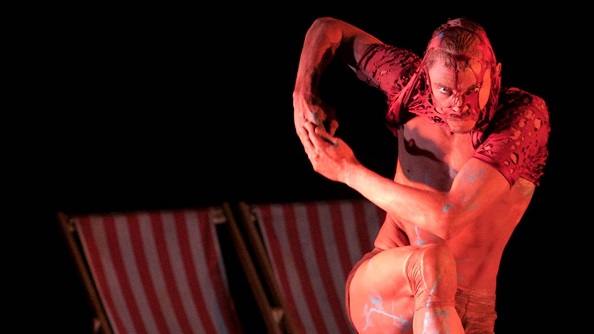 There were four very strong, excellent works in this sensational programme; a searing comment on our times.

Dance Clan 3 was part of the indigenous arts and culture festival Corroboree. Stephen Page commissioned four of the female senior artists of his company to create works.  Dance Clan 3 was dedicated to one of Stephen’s mentors who lived in the central desert and had just passed away.

Typically Bangarra in style, there were some stunning visual effects and the choreography combined both traditional Aboriginal/Torres Strait Islander dance and contemporary dance in the company’s distinctive fusion of schools. We jumped from the clear turquoise waters of Cable Beach in Western Australia to the Torres Strait, to the central desert lands, and the urban sprawl of Sydney, telling the stories (and suffering) of the Aboriginal people.

Nala, the love story of Tara Gower’s mixed race grandparents, had a joyous ‘Bran Nue Dae’ atmosphere at times; an almost Vaudeville feel with a pulsating, vibrant soundscape. It had some wonderful choreography, and some very difficult, unusual lifts. Great fun was had with the chip–bag dance at the open air cinema. I especially liked the male duo/tango that was part of it. I was also most impressed by the mysterious dancers representing the land in red and brown costumes. There was wonderful use of film, making a plea for understanding and conservation of the land and environment. 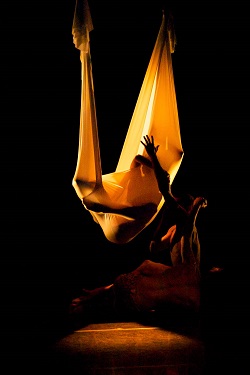 Some of the strongest emotional impact came from Jasmin Sheppard’s Macq, about the treatment of Aborigines under Governor Macquarie. It opened with a very powerful duet of a woman mourning her dead husband, with striking Carravagio like lighting. The chilling Bodies in the Trees sequence was haunting and startlingly shown. Particular mention must be made of Daniel Riley’s performance as Governor Macquarie, with his extremely strong, angular solo on the table, using voice overs of Macquarie’s diary.

Between the second and third work was Deborah Brown’s Dive, a dance film about pearl divers. It was shown using a canvas projection screen hoisted with ropes and set up accompanied by conch shell blasts. The film was terrific; superbly photographed and danced. There was marvellous use of close ups and great use of heavy old fashioned diving helmets. At one point the women of the company became the precious pearls, caught in nets dragged by the men.

Yolande Brown’s Imprint brought the evening to a close. Imprint was about the 1978 women’s petition using Batik designs to support native title claims. It was by far the most abstract work, with the dancers becoming the environment. Most effective was the bat-like orange figure. Choreographically it was both acrobatic and sculpturally sinuous, and it included much floor work. One of the dancers was painted in full red and yellow body paint onstage during the performance. It ended with flowing white lines on the floor and perhaps a mysterious cyclical reconnection to Nala.

A small quibble would be perhaps that it was a little confusing and unclear as to when one work finished and the next began, but this was a great chance to see the tremendous talents of Bangarra in a thrilling, very topical and thought provoking programme.