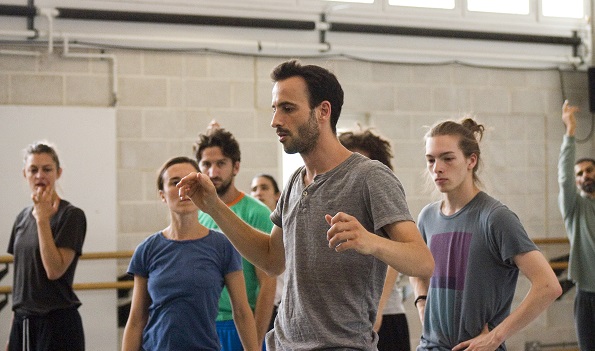 When one of the dance world’s hottest contemporary names chooses to premiere his new work at the Melbourne Festival, you can be sure that the glare of the spotlight will be intense. However, Hofesh Shechter is used to both the brightness and the danger.

Perhaps, given the climate and the time of year, it is entirely appropriate for UK based, Israeli born choreographer/composer Hofesh Shechter to stage the world premiere of his new work, Sun, here in Australia.

Having already made two previous Melbourne Festival appearances, Shechter’s company are well used to the clamour of antipodean acclaim. Their 2011 piece Political Mother left locals looking for more and Shechter keen to bring back something entirely new. From his hotel room in Vienna, where he is putting the final touches on the work, he enigmatically declares, “Sun can be kind of a festive event but also something that could make people uncomfortable. So I think perhaps it’s a good balance to strike in Australia. It may be relevant.”

For the former rock drummer turned choreographic virtuoso, the journey from early works like Fragments and Cult to universally lauded Festival attraction has been fast and potentially disorienting. “More than anything,” he says, “I try not to think about it too much. I wake up in the morning and have a cup of coffee and I’m not exactly thinking what the whole world maybe expecting of me. But y’know, I am aware of it and there is something very exciting about it, something that can be very energising.”

Known for creating works that attract clichés like ‘raw physicality’ and ‘darkly evocative’, Shechter reflects that Sun is a piece that is more consciously ambiguous. “There is something extremely playful with Sun but somehow it ended up playing with fire,” he explains. “So there is something quite dangerous about it. There is this sense of both a very heavy and a very light feeling and it I think it depends a lot on how the audience read it. It has everything that should be extremely positive but it’s not necessarily so.” 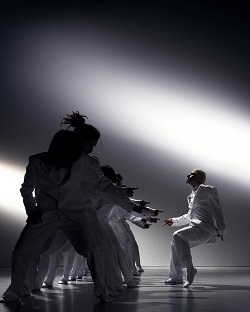 Naturally, Shechter shies away from the didactic, choosing instead to see his work as the beginning of a process rather than the end. “I’m trying to bring questions and put them on the table. I’m bringing problems and conflicts; things that have disharmony, and I’m placing them on stage. The conversation goes on in the audience’s head.”

As it is for every artist working with the non-literal language of movement, one of the principal challenges for Hofesh Shechter is to engage audiences more used to the spoon feeding aesthetic of cinema and TV. Although great contemporary dance will always retain its abstract roots, there is a need, Shechter argues, to give audiences a way in.

“I don’t come out with statements but I do feel that it’s useful for everybody and it’s more powerful if you do understand the environment you are in. For an audience to have a grip on the sort of emotions we are dealing with is important, otherwise it becomes so abstract that it’s too difficult for them to have an emotional response. It’s not that you can’t have an emotional response to the abstract, but I think that there is something very powerful about connecting ideas and emotions.”

When dealing with complex ambiguities and/or deeply psychological themes, the obvious risks are both obscurity and over-telling. How then to guide an audience through? “Mainly I think about the flow of the piece; how it goes from one part to another and what kind of connection or emotional place the person is in when they see one thing and then the next thing.”

If in this respect Shechter is like most good choreographers, what makes him unusual is that he also composes the scores for his works, placing him inside both the music and the dance. Indeed, on the day we speak he allows himself a little grumble about the fact that he is due in the studio to “haggle with a piece some more.” As he explains it, “There’s something great about it; y’know, having control over everything, but there’s also something exhausting about it. It’s like a constant stream of decision making.”

And then there is the issue of distance; how to see a work with a measure of cool headed objectivity. In Shechter’s case this ‘problem’ is clearly exacerbated. “For a while I let myself get carried away,” he admits, “but then I will take a few days away and just sort of watch it.”

Fine in theory but not always so easily achievable, as he further explains. “Choreography is a very active form of art. I have to be in the studio and I have to use my own body and I have to do it. So removing myself is a really, really tricky thing.”

Being as hands-on as he is, Hofesh Shechter is conscious of avoiding the trap of the creative bubble. “The presence of an audience means that there is this point of sharing something. I’m really not into drowning in one’s own dream without leaving an opening. If we can dream together it’s better,” he concludes.

In this he is more than ably abetted by his loyal ensemble of fourteen dancers. Not only do they directly inform and embody Sun but their mere presence denotes an inescapable truth about the art form. According to Shechter, “The body of a dancer is the most direct, the most honest form of communication because what you see is all there is. If they’re hiding then you see someone hiding; so in a way they have nowhere to hide. So it’s a very raw profession.”

With tags like raw, energetic, explosive and rock’n’roll flying around, the expectation is that Sun will deliver yet another hot and sweaty blast of Shechter’s signature audience pulverising power. With 120 suspended light bulbs to illuminate the action, and a trademark blistering soundtrack, the sun might just burn us this time. (And I for one won’t be wearing sunscreen.)

Photo (top): Hofesh Shechter in rehearsal with his dancers for Sun. Photo courtesy of Melbourne Festival.