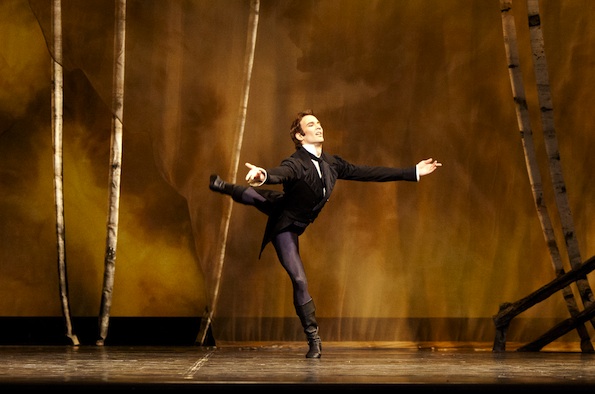 West Australian Ballet welcomes their new Lead Artist, Czech dancer Jiri Jelinek. Previously Principal Dancer at Stuttgart Ballet and most recently at The National Ballet of Canada, he brings with him years of experience from across the globe, having danced major roles in Swan Lake, Romeo and Juliet, The Taming of the Shrew, A Streetcar Named Desire, Giselle and Edward II.

Jelinek will perform the lead in West Australian Ballet’s first-ever production of the complex love story, Onegin. He has previously received much acclaim for his interpretation in Stuttgart, Vienna and Canada. Despite the challenges of a hectic rehearsal schedule and finding his feet in Perth, Jelinek found time to chat to Dance Informa about his latest transition.

Welcome to Australia, Jiri! Tell us, what made you decide to come to Western Australia?

I’ve always wanted to come over here. I wanted to discover this ‘island’s’ interesting repertoire and maybe get the chance to cuddle some kangaroos!

What are you enjoying most about working with West Australian Ballet?

I’m enjoying fewer internal politics, greater appreciation and a friendly and easy-going atmosphere, and by that I don’t mean a lack of professionalism. It’s something I’ve been looking forward to for many years.

On first impression, how do Australian dancers strike you as different from other dancers with whom you’ve worked?

Nothing really strikes me about the differences between dancers here or there — it’s a smaller company, so perhaps you don’t see as many ‘extreme’ talents. However, what I am really appreciating so far is how hard the dancers here work without being all stressed out, moody and weird about it. There are, of course, some people who are more insecure and awkward than others, but that’s normal, that’s the way it is in real life too, isn’t it?

The company is busy with preparations for Onegin this month. What do you think draws audiences to a ballet like Onegin?

I don’t think people know much about Onegin here, so I guess they’ll be coming out of curiosity and maybe because of the title. On that note, I’d like to encourage everyone to come to see this masterpiece by John Cranko – you won’t regret it!

Do you relate to the ballet’s main character in any way?

I understand the role very well. I’m a Gemini, so I relate to many characters I’m performing. Maybe that’s the reason I’m good at creating so many different roles [Jiri has had roles created for him by such choreographers as Christian Spuck, Kevin O’Day and Alexei Ratmansky]. I’ve also had my heart broken several times, so I can definitely relate to that!

You’ve had a varied and exciting career. Apart from Onegin, which is your favourite role to perform and why?
Definitely my favourite role, and the one closest to my own character, is Armand from John Neumeier’s The Lady of the Camelias. I can also relate very much to Petrucchio from Taming of the Shrew by John Cranko. A piece of Tybalt [from Romeo and Juliet] is in me too – I can’t deny it!

How has your understanding of what is important in a ballet evolved over those years?

I think what is most important is developing the ability to put your own self behind the character, to gain a true understanding of the role and of who you are as a person. The last part is the hardest part for most. You have to be honest on the stage and be yourself. You have to become the character and go for it with all that you’ve got and not just pretend, because that will be just lame no matter how nicely you’ll be dancing.

The great thing about being on stage is that you can’t fake that, you are almost naked and the audience can see right through you even if they might not understand the ballet. Maybe even especially if they don’t understand the ballet, as they don’t care about your fifth position or if you turn three pirouettes or five. You have to just go for it, there’s no time to be shy on the stage. So, you’ve got to bring it on with everything you’ve got, and keep going, all the way to the top!

What advice would you give young dancers who want to follow in your shoes?

Enjoy life and what you do, even though it is sometimes painful and not easy. Don’t let the others tell you that you can’t do it just because they couldn’t do it themselves and failed. As they say, “Where there’s a will, there’s a way!”

Always remember to work hard, but go for it outside the studio too. There’s a life outside of there, you know, and lots to experience. All of that, you will bring on the stage with you afterwards. Being in the studio 24/7 won’t make you a good artist.

Go to the gym so that the ballet won’t break you so easily, drink a lot of water, especially in the morning and throughout the day, try to avoid GMO foods as much as you can and support veganism. You’ll be healthier and help to create better world, not just for you, but also for everybody else!

What are your hopes for your future with West Australian Ballet?

To have fun with them, both on the stage and outside as well!