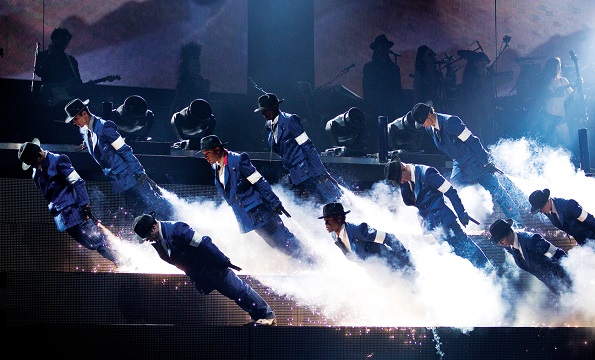 Cirque du Soleil’s Michael Jackson The Immortal World Tour is a visual treat. The performance is everything you would imagine it to be: the glitz and glamour of a Cirque production, teamed with the hits and unforgettable movements that made Michael Jackson the King of Pop.

The production team went above and beyond to create a visual spectacle in the form of set design, stage layout and lighting. The gates of the Neverland Ranch are replicated in the opening scene, creating a dream-like atmosphere. Several large screens forming the background of the stage enabled Michael’s video clips to play, as well as showing tributes to the late star. Coupled with some of his more emotional ballads, it was hard to not shed a tear for the man who lived a one-of-a-kind life. Lighting was fantastic, especially when incorporated into the dancer’s costumes. The crowd would erupt with cheers when the dancers were illuminated or descended into the air on ropes with flashing lights.

The choreography is what you would expect, for a Michael Jackson tribute show. Featuring a mix of his greatest hits including Smooth Criminal, Thriller, Beat It, Don’t Stop Till You Get Enough, and Can You Feel It, the iconic moves of Michael Jackson were imitated by a team of talented dancers. A standout was one-legged dancer Jean Sok who amazingly performed break dancing and hip-hop moves on crutches. Jean was an inspiration and received thunderous applause throughout the performance and at the end.

Cirque du Soleil performers worth a mention are pole dancer Anna Melnikova and aerial artists Luba Kazantseva and Hampus Jansson. It was quite often that my jaw would drop when watching these artists at work. Anna’s incredible strength and flexibility was demonstrated in a series of movements, that would have required years and years of practice to master. Luba and Hampus were also outstanding in their ability to make their performance look not only flawless but effortless.

Costumes were phenomenal. Five ‘fanatics’ that made up the cast wore Michael Jackson’s most iconic outfits including the infamous red jacket. It was a fitting tribute to a man who influenced fashion in the entertainment industry, as well as song and dance. The team of dancers supporting the fanatics wore costumes with all of the glitz and glam that you would expect to see from a Michael Jackson concert or video clip.

Perfect for the entire family, Michael Jackson The Immortal World Tour is sure to have you dancing in your seat.