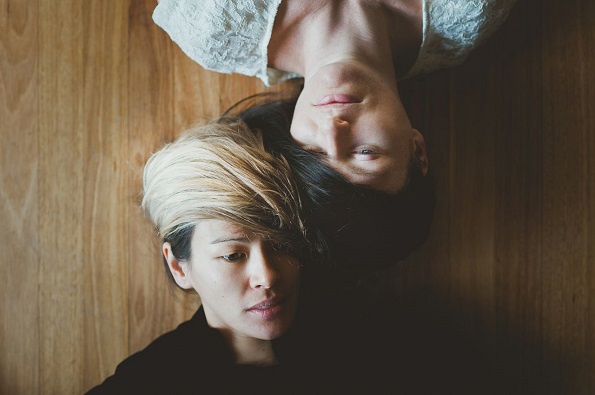 Victoria Chiu explores our relationship to comfort in her latest work, Floored. Floored began its life in Switzerland but remained unfinished after Chiu returned to Australia. Aided by the support of a Dancehouse Housemate Residency, Chiu was given the chance to revisit her fascination with the topic.

Floored is structured in three phases; the first considers the gratifying experience of acquiring comfort, the second examines its restrictive addiction, and finally, the last reflects on the nature of good balance.

The duet, performed by Chiu herself and fellow artist Amelia McQueen, pairs the first section with the calming yet generous strains of Roland Cox’s score. The women move easily and fluidly across the space, indulging those movements that feel most pleasurable and which offer the pathway of least physical resistance.

In contrast, Chiu and McQueen drag themselves across the floor during the second section in gratingly repetitive sequences, thrusting forwards, then backwards, and swinging around at angles to each other. They literally bang their heads against the walls in the process. They draw our attention to the fact that addiction to comfort is itself a source of discomfort and form of psychological imprisonment, as is true of many types of addiction. The dancers attempt to escape this one-dimensional existence by suspending their arms and legs off the ground but are ultimately defeated by the force of gravity. The tyrannic routine continues.

The third section is heralded by a shift in pace from the electronic sound backdrop of the second section to the harmony of a live acapella choir, hidden from the audience’s view. One of the walls has been broken down. After an initial moment of confusion, the performers, particularly Chiu, begin to become more open to the possibilities offered by the stage. Chiu slithers underneath the rectangular panels that make up the floor of the stage and gradually begins the process of moving them. In doing so, she literally breaks up the foundations that underpin McQueen’s continued adherence to the routines and motifs introduced earlier in the work.

Chiu’s investigation, abstract as it is, can also be considered highly topical. The individual’s relationship to comfort is, somewhat ironically, a rather uncomfortable topic for members of the First World. Indeed, key issues such as climate change have put the ethics of consumption and habit at the centre of global debate in a way it has arguably never been before.

Ultimately though, Floored’s contribution to such debates is somewhat obscured by Chiu’s prioritisation of process over product. The result is that, whilst by virtue of being intimately connected with the work, the insights offered are likely highly evident to Chiu and others connected to it, they are not, at least not without reference to a great deal of supporting material, accessible to the open-minded outsider. Chiu needs to find a better balance between gratifying her own research interests and providing a vehicle for the dissemination of that research through this performance work.

No doubt, however, Chiu will find ways to offer future audiences more clues as to the internal logic of the piece so as to help them connect emotionally with what is, otherwise, a clearly researched and potentially resonant piece. Until then, it is perhaps best regarded as a promising work in progress.