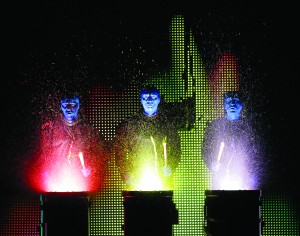 The world famous Blue Man Group is a collective of entertainers who got together to create something new and different, and to fill what they saw as a gap in entertainment. What they have produced is a show that doesn’t sit in any particular performance genre. Now travelling the world with multiple casts, Blue Man Group has made quite a name for itself, fast heading toward Cirque du Soleil-type impact on the world stage. It is unique, and something of an experience, literally. Incorporating live music, clowning, art and audience participation, this show is one that can be appreciated by a wide audience, from all walks of life, as there are so many differing elements to connect with as an audience member.

The Blue Men, who are literally blue, are silent the entire show. They use the traditional clowning technique to communicate with each other and the audience. The style is rather gestural, and full of subtle nuances that require the audience to pay close attention, so as not to miss some of the detail. All three blue men are skilled musicians who have found many ways to introduce humour through music and rhythm.

Especially appreciated by this Australian audience was their homage to some of our most famous and popular songs, such as ‘You’re the Voice’, by John Farnham (blonde wig included!), and ‘I Come From a Land Down Under’.

The opening of the show was also Australian-ised, with individual audience members mentioned on a scrolling screen either side of the stage, and the circumstances surrounding their being at the show, what they do for work, or particularly hilarious, if they had just updated their Facebook status. This followed by a sudden halt of the show to welcome late-comers, unashamedly drawing attention to them through live feedback film, making it obvious each performance was unique. 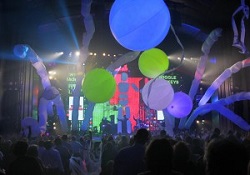 Regarding audience interaction, there were whole sections where a member of the audience was selected at random to perform with them, and the cast would react seamlessly to what the random addition would do. They had us sitting on the edge of our seats wondering what on earth would happen next. It was entirely unpredictable.

Skeletons and the human body were a running theme throughout, with the resident band dressed in glow in the dark skeleton outfits and skeletons on the moveable screens, serving as a major theme to the constantly changing set.

Discussing the human body, one section went into some detail of how the eye works, how our brain perceives image and colour and how it rearranges colour so we see it how our brain wants us to see it. All the parts of the show when strung together actually had a deeper message regarding our human perspective and possibly asking us to think bigger, beyond our usual pathways and thought patterns…to consider looking at life or our circumstance with fresh eyes.

There were some fantastic original musical compositions, played not only by the band but on such new inventions as an oversized pipe ‘organ’ made from plumbing pipes, or individually-worn unique instrumental creations. Another running theme, and one referred to quite frequently, was how we are all ‘connected’…but not really anymore. Technology has taken over and we aren’t truly connected except (according to our Blue Men) for the pipes connecting our plumbing….hence the ‘pipe’ organ and other such creations. It was presented in a very intricate and humorous manner, with a sincere, thought-provoking message.

I found this show quite enjoyable. It would be a good choice for those who aren’t so inclined to go and see serious theatre, as well as for those who are. It would definitely be one that you could take your non-theatre-going friends to and they would most likely have a very enjoyable experience. It crosses many conventional theatre boundaries in scripting, timing, performance qualities and general visual presentation. It carries themes that everyone with our westernized societal experience can completely relate to. It is not ashamed to discuss openly how we really are, not just the theatrical version of ourselves, and of course, makes us laugh at ourselves. Go and see it if you get the chance.