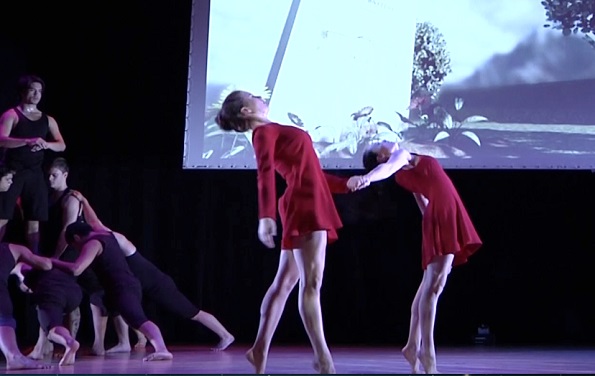 A company of eight dancers from Unitec in Auckland travels to Italy this month. They will be performing in The Juniper Passion, New Zealand’s first ANZAC opera. Composed by Michael Williams with libretto by John Davies, The Juniper Passion is set both at the battle of Monte Cassino in 1944, and in 1960 at the graveyard near the battle site where 343 New Zealanders are buried.

The dancers perform extended sequences portraying battle, the death of the protagonist and a series of duets and solos that sees each character embodied by a dancer and a singer. The company is a combination of graduates and current students and they have made a significant contribution to the choreography. The season opens at Teatro Roma, an ancient Roman amphitheatre on the slopes of the mountain where the battle took place, with four subsequent performances in and around Rome.

You can watch a live streaming and view more of the company’s activities on thejuniperpassion.webs.com.

Natalie Hona in Java Dance Company’s ‘Back of the Bus’. Photo by Mikel Taylor

Java Dance Company will be performing their acclaimed work Back of the Bus at the Mackay Festival of Art in Queensland next month. The cast comprises New Zealand School of Dance graduates Lauren Carr, Natalie Hona, Liz Walker and Artistic Director Sacha Copland. Fresh from sell-out seasons at the Wellington International Arts Festival and as one of the top 10 reviewed shows at the Adelaide Fringe Festival 2012, Back of the Bus will take audience members on an unforgettable bus trip through the streets of Mackay. For more information or to book, head to www.mackayecc.com.au/mackay_festivals.

Barbara Snook and Rosemary Martin are the first Auckland University students to complete PhDs majoring in Dance Studies. Both women work at the National Institute of Creative Arts and Industries – Barbara as a Professional Teaching Fellow for the Dance Studies programme, and Rosemary as a Dance Studies Post Graduate Advisor and Lecturer.

Barbara originally taught dance for high school students and was the Caroline Plummer Fellow in community dance at the University of Otago in 2008. She is now looking forward to research and a lot of teaching, which she “just loves”. Her thesis explores the meanings and contexts informing the delivery of dance in New Zealand classrooms.

Rosemary Martin’s thesis is about international education in dance and follows the personal narratives of seven women from the southern Mediterranean region. Rosemary retired from a professional ballet career with The Royal New Zealand Ballet to pursue academic life. She travelled to the Middle East to do her PhD research and to get outside of her comfort zone. You can read more about Rosemary’s story here: www.creative.auckland.ac.nz.

Atamira Dance Company’s KAHA 2013 programme is presented this month in partnership with the Central North Island Arts Consortium in Hawkes Bay (June 13), New Plymouth (June 16) and Hamilton (June 19). The company will then embark on a US tour in July and August, performing in Hawaii, San Francisco and at the prestigious Jacob’s Pillow Dance Festival in Massachusetts. Upon their return to New Zealand, Atamira will rejoin the New Zealand festival circuit with KAHA in October.

Okareka Dance Company combines dance, theatre, music and waiata (song) to premiere the highly anticipated K’Rd Strip, playing from June 12 as part of the NZ Matariki Season. The work is Okareka’s response to an Auckland landmark that has anchored its deep roots into the veins of New Zealand history, both culturally and counter-culturally. It is a work that is unlike anything Okareka have created before; pole dancing, drag queens, haka, contemporary dance and dramatic scenes entwined with live vocals of an all-New Zealand music score from the likes of Gin Wigmore, Mi Sex, Annie Crummer and Th’Dudes.

The work also marks the debut of Okareka’s Matariki under the Stars tour, which will feature an annual performance from the group every year during this time-honoured tradition as part of the Maori calendar.

K’Rd Strip tours NZ from June 11 to July 13. Visit www.okareka.com for ticketing, venue and further information regarding this event.

In celebration of the Royal New Zealand Ballet’s 60th birthday, Russell Kerr’s beloved production of Swan Lake will be taken on an eight-centre national tour, starting next month.

When it premiered at the St James Theatre in Wellington in 1996, the choreographer and former Artistic Director’s opulent production received critical acclaim and had audience members on their feet applauding.

Russell Kerr ONZM QSM is humbled to see his work showcased this year. “This 60th anniversary offers The Royal New Zealand Ballet and the country the opportunity to mark the occasion with performances of the company’s own production of Swan Lake and also offers dancers and choreographers the opportunity to relive the art that passes between them: the act of giving and receiving,” he says.

Complementing Kerr’s impeccable choreography are extravagant costumes and spectacular sets designed by the late Kristian Fredrikson, often described as a genius, who went on to become one of Australasia’s most experienced and sought-after designers. Fredrikson worked alongside Kerr and the RNZB for many years designing costumes and sets in his signature elaborate and richly-textured style.

The Vodafone Season of Swan Lake runs from July 18 to September 1. For more information, visit www.nzballet.org.nz.