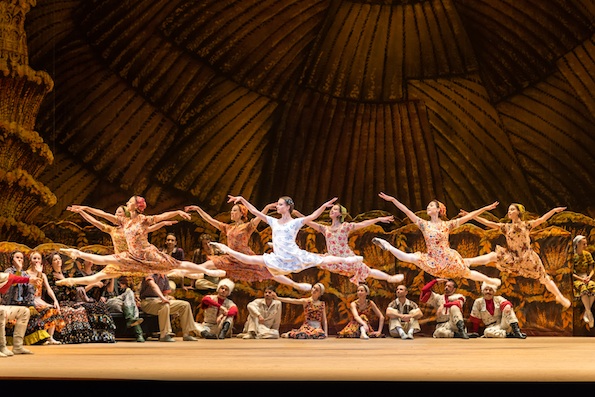 Brisbane recently welcomed world-renowned ballet company The Bolshoi Ballet to our city after two decades since they last performed in Australia. The Bolshoi present two works never before seen in Australia, Le Corsaire and The Bright Stream.

The Bright Stream is steeped in history and it follows the transformation of a soviet-era ballet in the 1930s. It was composed by Dmitri Shostakovich and choreographed by Fyodor Lopukhov, yet the ballet lived a short life. Set on a collective farm at harvest time, the comical ballet was shut down and its choreographic notation has never been found. However, in 2003, Alexei Ratmansky staged this reconstruction of the original The Bright Stream. I must commend Ratmansky on his brilliant chorographical work that moulded together characterisation and humour to transform a simple ballet into a comical masterpiece.

I have not seen ballerinas with such beauty, grace and poise as both female principal dancers Nina Kaptsova (Zina) and Maria Alexandrova (Ballerina). To watch Alexandrova take on a character and change during the performance to a male solo was extraordinary. I must also mention a brilliant performance from both male Principals Mikhail Lobukhin (Pyotr) and the leading Male Ballet Danseur turn cross-dresser Ruslan Skvortsov (Ballet Dancer). Skvortsov, portrayed an amazing role not only performing a male solo but transforming into what I would call a ballerina (the likes of what you would see in La Sylphide or Giselle) and flawlessly dancing in pointe shoes was what topped off the night for me.

My other favourite characters would have to have been The Old Dacha Dweller (Alexei Loparevich) and anxious-to-be-younger-than-she-is Dacha Dweller (Anastasia Vinokur). Both delivered their characters with perfection and added even more comical value to the show their humerious pas de deux. They had me crying with laughter with a performance well worth witnessing.

Costumes Designer Elena Zaitseva has put together a perfect palette of costumes of farmers and peasant workers at the harvest as well as more traditional period outfits for the Cossack dancers.

Another part of the performance that contributed to its brilliance was the set designed by Boris Messerer. The exquisite wheat fields, tractors, planes and trains and oversized produce were all visually appealing, as was the opening scrim of portraying soviet slogans and headlines, some reading “Muddle instead of Music” and “Balletic Falsehood”.

I am so grateful I had the chance to see such a world-renowned company perform to perfection. I can only hope they will return to Australia soon to share more of their talents and traditions with us.