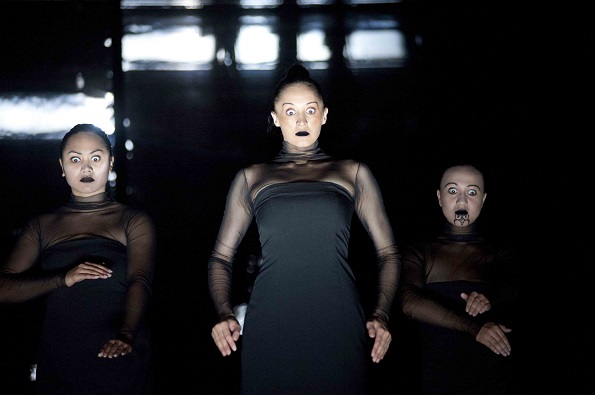 New Zealand-based dance company MAU first presented Birds with Skymirrors to critical acclaim at the Theater der Welt Festival in Germany in July 2010. Since then, Artistic Director Lemi Ponifasio has presented the full range of his company’s work extensively throughout Europe as well as in Canada and Chile.

Despite the obvious proximity, this is only the second time MAU has been to Australia; our first glimpse was TEMPEST: Without a Body, which formed as part of the 2010 Sydney Festival.

Self-taught Samoan choreographer Ponifasio refers to his work not as theatre or dance but as karanga, “a genealogical prayer, a ceremony, a poetic space.”

“I try to…create a sort of cosmological space where we can somehow realize that we are part of the whole process of earth,” he says. His works are known for being radical and are often intended as political messages.

Birds with Skymirrors is no exception. The tone is bleak and unrelenting in its demands on the audience as we experience a full-length, ceremonial-style spiritual ritual.

The opening scene creates the impression of being in a kind of dark, post-industrial or post-‘end of the world’ setting. Two bodies are visible in the murky light. A powerfully-built man watches from a distance as a seemingly sophisticated topless female in high heels mesmerises us with her sensual and undulating sequence. Her piercing tribal-like incantations wrench us into a dark and powerful metaphorical journey which seems to foretell the end of the world.

This is powerful but demanding stuff taking place in a monochromatic environment with no relief from the disturbing non-musical soundtrack. Ponifasio’s willingness to allow prolonged silences and abrupt incantations allows him to challenge the audience to focus their attention on what is essentially a very “still” work.

A small cast of six male dancers, priest-like in their ritualistic movement, tunic-type garb and solemn demeanor float through and across the shadowy space. Sometimes slowly, sometimes at a more rapid pace – Tai Chi in fast motion comes to mind. With arms of powerful beauty and undulating back muscles, there is a sense of being hypnotized and becoming part of a mystical ritual.

And although Ponifasio prefers the word use of ‘ceremony’ to ‘ritual’, either way the performance is certainly collective in nature, invoking some dancing styles from the Pacific islands, shown particularly in the fluency of the hand motions. Drawing on traditional dance elements to convey universal, spiritual themes is an important artistic achievement by Ponifasio. The use of repetition combined with the almost mask-like facial expressions of the dancers reinforces the idea of using ritualistic movement as a means to alter consciousness.

Whilst an intensely collective performance, there are rare but memorable individual moments. One of these is a superb male performer moving his body gracefully perhaps through water…or perhaps floating on the wind. Combined with the bleakness of the set he seems to evoke the vision of a slowing dying bird bringing to mind the inspiration for this work.

Ponifasio explains that while traveling to Tarawa, an atoll in the central Pacific, he witnessed a flock of birds flying above with ribbons of discarded videotape floating from their beaks. The videotape was reflecting the sun whilst also bringing certain death to the birds. “That vision was both a vision of beauty and the spirit of death,” Ponifasio said.

A video of a pelican struggling to escape an oil-slick is periodically projected on a backing screen, confronting us with the catastrophic impact man can have on his environment.

The female performers play a lesser role, but with high impact. Particularly memorable for this reviewer was the vision of three ‘high priestesses’ gazing at me with devilish red eyes and twirling illuminated ‘pois’ before intoning the spirits?…or us?…with ritualistic cries.

While much attention is given to the director’s political and environmental message, in many ways the work is metaphysical in its contemplation on the certain, unrelenting movement towards death.

Some may say the work would benefit from serious editing, but lack of dramatic impetus and variation suggests that Ponifasio’s main concern is not the audience’s acceptance or appreciation but the consciousness of both the dancers and the audience. “…Movement for me is the beginning of the dance, not the dance itself. It’s more about one’s consciousness – what you are activating when you dance.”

On opening night at Carriageworks, the audience was pensive and challenged. At the after-performance reception, Ponifasio speaks of his vision and belief in humanity with humour and humility – in sharp contrast to the dark power of his hauntingly beautiful Birds with Skymirrors.