Energetiks has three double passes to giveaway to the dance documentary First Position, with the film opening in cinemas on April 11.

Just “Like” Energetiks’ Facebook page (www.facebook.com/energetiks.dancewear) and write on their wall (in 25 words or less) why you should win tickets to First Position. Entries close next Monday, April 8. 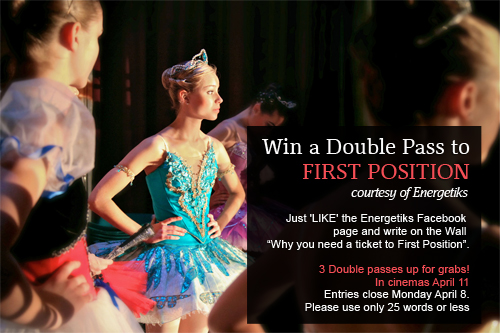 Produced and directed by ex-dancer Bess Kargman, First Position follows six young dancers as they prepare for the Youth America Grand Prix. Every year the prestigious competition attracts over 5000 applicants, of which 300 are selected for the finals in New York City.

The six dancers on whom the film focuses share a fierce determination and a love of dance, but this is where the similarities end. With origins as diverse as Sierra-Leone, Israel and California, their upbringings differ greatly. Kargan sheds light on each dancer’s family life, circumstances and path thus far.

The giveaway tickets, courtesy of Energetiks are valid from April 11 to end of the film’s theatrical season at all participating cinemas. (NSW, ACT, VIC, QLD, SA, WA).  Each ticket admits two.

Energetiks is a leader in Australian dancewear. Check out their latest designs and range of class wear, footwear and fashion at www.energetiks.com.au