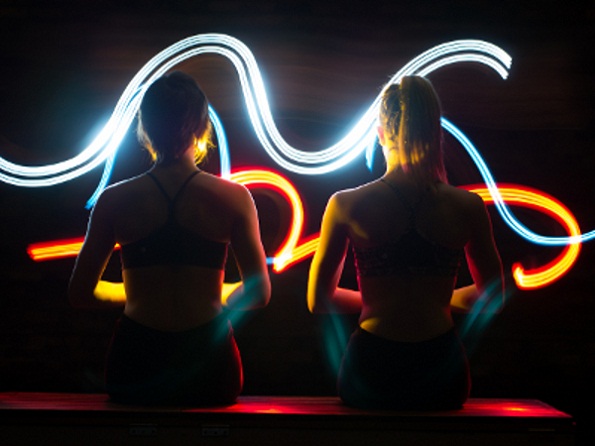 Fresh from the Ten Days on the Island festival, in a blink-and–you miss it tour, Sydney was privileged to have a short visit from Tasdance at Parramatta Riverside.

In an exploration of light and ritual under Annie Greig’s direction, the company brought us a delightful double bill of contrasting contemporary dance styles that showcased some superb dancing in a striking, unusual combination. Both works demand split second timing and controlled precision.

First was the late Tanja Liedkte’s Enter Twilight, created for the company in 2004 before her tragic death in 2007. Three women in short dresses (red, green, purple-brown) with white collars emerge from the gloom – are they figments of the male’s imagination?

The set design features large boxes that are lit dramatically from underneath/inside. Some of the choreography is doll or robotic like, reminiscent of an updated Coppelia. At other point’s Liedtke’s choreography is possibly Cunningham-inspired in parts, requiring angular arms, immense control and a very flexible back. A sliding robotic bourrée on high demi pointe at times was used (all the dancers have fabulous pointed arched feet) and also, a fast sliding-while-sitting movement.

It examines the paradoxes that exist within life’s rituals: the light, the dark, the virtuous, the evil. Are the females benign or dangerous? Catwalk, model-like movements are contrasted with rolling floor work and there is an emphasis on over-precisely placed fourth position. The music hums, beeps and crackles in mysterious synchronicity.

The audience was rocking with laughter in places for Byron Perry’s Light Entertainment, where light is interpreted through repetition, improvisation and mystical, frivolous and pure physicality. ‘Light’ as in mood, but also in the jumps and in the tubes of light that the dancers, all in white costumes, manipulate to form a square, or vertical lines, or as if sword dancing.

Introduced by a witty acerbic voiceover, the work begins with a stationary, slow rocking side-to-side motion, which is expanded as the dancers eventually move in a travelling, writhing mass. Much fun is had with the exploration of speech and sound rhythms and blocks of movement are made on the horizontal, diagonal and vertical. One section, possibly revealing a Bonachela influence, is quite ritualistic. There is a concert sequence and one of the cast almost goes to sleep – this develops into a wonderful dance contest duet of various styles including breakdancing, Irish dance and Michael Jackson-like movement. This then develops into a fun section for the whole cast, using voice patterns and rhythms again. For the entire powerful, pulsating, throbbing culmination, much fun is had with hand-held torchlights dancing.