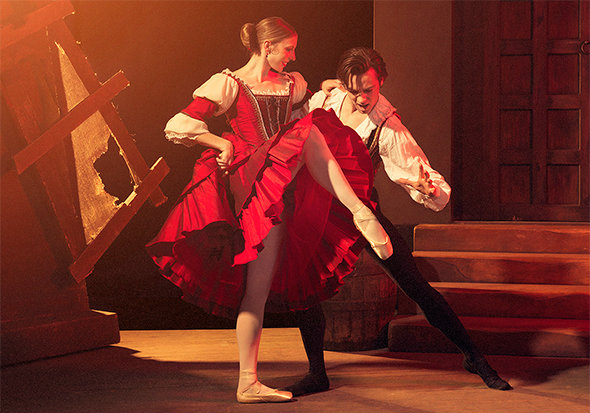 In a dusty old box in a storage unit somewhere there lays a copy of American Ballet Theatre’s Don Quixote on VHS. Though its format is now teetering on extinction, the battered little tape is anything but forgotten. Filmed in 1984 and starring the incomparable Mikhail Baryshnikov and Cynthia Harvey, it was my entertainment of choice in the hours between school and ballet practice. I knew every nuance of it like the back of my hand and never got bored with watching it.

Hearing that The Australian Ballet was staging Rudolf Nureyev’s version of Don Quixote this year, my expectations were sky-high. Thank goodness I wasn’t disappointed.

The structure of the ballet is perfectly balanced; the fun and dynamics of Act 1 and 3 are enhanced by a hypnotic, dreamy Act 2. Principal Artist Amber Scott was as close to flawless as a human being can get; a smart choice for the Queen of the Dryads. Corps de Ballet member Benedicte Bemet as Amor was a standout, exquisitely bird-like and cherubic.

In the lead roles of Kitri and Basilio respectively, Principals Leanne Stojmenov and Ty King-Wall shone. They weren’t able to top my memories of Harvey and Baryshnikov, but taking this production purely on its own merits, it would be impossible to find fault with these two outstanding current artists.

Coryphée Garry Stocks was hilarious as the ridiculously foppish Gamache, but it was Soloist Brett Simon’s Don Quixote who really stole the show for me. I was actually in awe to discover at the end that the title role was played by a relatively young soloist and not a veteran of the stage. Simon has a truly unique gift to convey both emotional depth and story. His interpretation of this rich and important character felt like his own, rather than a reproduction of a past artist’s, and this made him the only aspect of this production to truly exceed my expectations.

This year marks 75 years since Nureyev’s birth and 20 years since his untimely death. Don Quixote, with all its colour, flamboyance and happy energy is such a positive tribute to this magnificent artist.