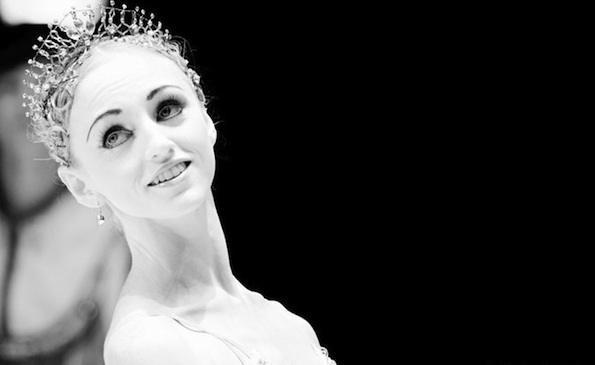 Ballerina Yaraslova Araptanova trained at the Perm Ballet School in Russia before joining the Perm Opera and Ballet Theatre firstly as a soloist for nine years, then as a lead soloist. She was then invited to work in the Imperial Russian Ballet as a lead dancer alongside her husband Alexander Volkov. They have both enjoyed great success with Australian audiences on more than one occasion and look forward to returning to our shores with OperaMania, where they will perform two adagios from Tchaikovsky’s The Sleeping Beauty and Nutcracker. Yaroslava will also dance the legendary Dying Swan by Saint-Saens.

This will be Yaroslava’s third tour to Australia, but on this trip she is hoping to find time to visit one of our wildlife parks and to meet with the Australian public. In anticipation of their tour, Yaraslova and Alexander spoke to Dance Informa from Moscow…

What has been your favourite role to dance so far?

Yaraslova
I love all of my roles. It’s just that some are performed more often. I dance almost the entire classical repertoire. I really like performances where the drama is brighter and where throughout the performance the character of my role develops.

Alexander
I really like the role of the Poet in the one-act ballet by George Balanchine, La Sonnambula, directed by Bart Cook and Maria Caligari from the world famous New York City Ballet. The music is by Vittorio Rieti and uses themes from various operas of Bellini. In the duet Balanchine shows a psychological relationship between the Poet and La Sonnambula (the sleepwalker). It ends sadly when the Poet is stabbed, but the audience is much more struck by how the fragile singer La Sonnambula is able to raise the Poet from the floor and hold him in her arms.

From the classical repertoire, I especially like the role of Prince Siegfried in Swan Lake and the brilliant work for the character of Carabosse in The Sleeping Beauty. Of character dances I enjoy the Spanish roles, such as Basil in Don Quixote.

What role would you most like to dance and in which theatre?

Yaraslova
That would be Giselle. My dream is to perform the entire ballet. I have danced fragments and single acts, but I have not done the whole ballet. I look forward to any new role. It is always a great gift. With a new role there is the birth of a new character who uncovers something new in me – it’s hard to compare it with anything.

Alexander
In the course of my work my dream has been to teach. I have a huge repertoire and I bow to the entire group of my brilliant, great teachers. I could speak about each of them without end. I have studied in Japan and in America. I want to pass on the experience I have gained as I have something to share.

What is the hardest thing about being a dancer?

Yaraslova
I think it is the discipline – every day maintaining your diet, the work regime and rest. On tour every day we have make-up, costumes, performances and travel, and all by the clock.

What is the best part?

Yaraslova
That would be the gratitude of the audience. It’s a good performance when the viewers are pleased and you understand that your labour is in demand. Flowers and creative fulfillment!

How do you spend your time when not dancing?

Yaraslova
On the road, when there’s free time, I try to see the country and get to know new culture, monuments and museums. At home, my baby Yaroslav is my most important treasure. I study arts part-time at a university, specifically how to run a ballet troupe. In the future, I want to teach. I have a lot to share but I need a degree and am working on it now. And both at work and in leisure, I spend time with my husband of the past nine years.

Have you danced in any other opera productions before?

Yaraslova
In operas there are dance segments. Many operas include ballet scenes. There are always a lot of people with the choir and soloists, so you have to be very careful not to get lost on stage and avoid crashing into the crowd. If a ballet is inserted into an opera to add meaning, they adorn the action. In some operas ballet divertissements can be seen. In previous centuries, this tradition was extensive.

Participating in the Perm Opera and Ballet Theatre production of The Seven Deadly Sins by Kurt Weill and Bertolt Brecht with director Radu Poklitaru was an extraordinary experience. We were on the stage with opera singers who did the dance moves. I not only danced, but also recited phrases. He presented sounds and movements in a modern style. In the Imperial Russian Ballet we do a ballet cantata Carmina Burana by Carl Orff, staged by Mai Murdmaa.