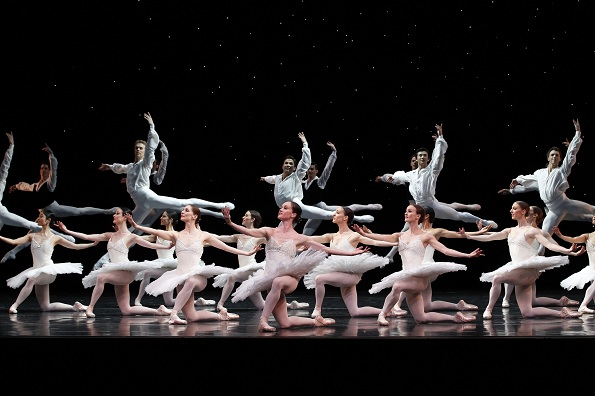 The Australian Ballet has come a long way since it took to the stage hot on the heels of the Borovansky Ballet back in 1962.  Our national ballet company may only be 50 years old, but it has a rich history of new and old works, and has consistently been comprised of talented and versatile performers.

It is surprising then, that The Australian Ballet chose to commemorate 50 years by holding a gala of international performers rather than showing off our own fantastic company.  Perhaps it was designed more as a treat for audiences to expose them to what the rest of the world has to offer.

The first act of the night comprised a series of modern and traditional pas de deux, starting with Overture, an exhibition piece choreographed by The Australian Ballet’s Artistic Director, David McAllister. It saw the full company on stage in classic white tutus for the women and white tights for the men.  I found myself bursting with pride during that piece as I watched the dancers smiling and resplendent in their strong technique and assured artistry.

Stuttgart Ballet’s Demis Volpi first choreographed a piece for the Noverre Society’s Young Choreographers – which is that company’s version of the AB’s Bodytorque – in 2006 and has been a choreographer on the rise ever since.  His piece, Little Monsters kicked off the international part of the gala, and highlighted the intricate, quirky, physically challenging, and emotionally thoughtful trademarks of Volpi choreography.

The National Ballet of China gave us the Act II Pas de Deux from Giselle.  While ably danced, this pas de deux is one that doesn’t stand well when taken out of context from the rest of the ballet.  The Love Pas de Deux from Carmen Suite was next, performed by Mizuka Ueno and Naoki Takagishi from the Tokyo Ballet.  The role of Carmen is an exciting and seductive one, yet Ueno failed to set the stage alight in her portrayal.

Enter, Julie Kent from American Ballet Theatre.  Undoubtedly the star everyone had come to see, she performed the bedroom Pas de Deux from Manon with all the joy of a young woman in love.  Her technique and lines are flawless, and she was ably partnered by The Australian Ballet’s own Adam Bull, who clearly shared Kent’s joy.  The pas de deux was over far too quickly and left us wanting more.

The virtuosic Tchaikovsky Pas de Deux was next and was brilliantly performed by local dancers Lana Jones and Kevin Jackson.  Jones has the right amount of ballon and quick foot work to excel in this piece, and Jackson was all technical perfection and brightness on stage as always.  This was a definite highlight.

The stars of the night, however, were undoubtedly Elisa Badenes and Daniel Camargo from Stuttgart Ballet who returned to the stage after Little Monsters to dance the famous Wedding Pas de Deux from Don Quixote.  Both only corps de ballet members, Badenes and Camargo showed the audience why Stuttgart Ballet is truly one of the greatest companies in the world.  Camargo was flawless in his execution of the many jumps and turns, and was a strong partner.  Meanwhile, Badenes had glorious long legs around her ears and held every balance of the difficult pas de deux with aplomb.  The one-handed presage lifts drew gasps from the audience (myself included) when Badenes hovered at the end of Camargo’s arm in a perfect split in seconde.

After witnessing such a spectacular performance, it was disappointing then that the second act brought us a lackluster performance of Etudes.  The ballet itself has some wonderful moments, particularly the opening scene and the diagonal jetes later in the piece.  The piece seemed to drag on a little and the company looked tired by the end.

Nonetheless, the gala was a fabulous night of diverse dancing and reminded us of the high caliber of our national ballet company.  Bring on the next 50 years!