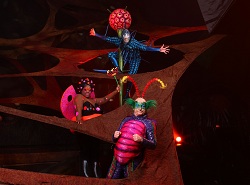 If you want to see a show that is going to blow you away, keep you on the edge of your seat, and occupy every single millisecond of your attention, imagination, visual and auditory senses; Cirque du Soleil’s OVO is the show for you!

Under the blue and yellow grand chapiteau of Cirque du Soleil, the magic of the show began to creep and crawl its way through the audience. Beekeepers wondered around in a state of caution as the buzz and anticipation grew louder and louder.  Energy was in the air. Crickets climbed their way onto the stage and pillars. The buzz increased – louder, faster. A swarm of bees flew in and BOOM! The lights went on and the show began! Such an opening was nothing shy of what is to be expected by Cirque du Soleil and OVO’s ingenious choreographers: Deborah Colker and Marjon Van Grunsven.

The iconic egg, translated in Portuguese as ‘ovo’, was featured centre stage. If you looked closely at the word ‘ovo’ on the grand egg, you’d notice that the left and right ‘o’ signified bug eyes, and the ‘v’ a nose.

Percussive Brazilian rhythms of batucada and samba filled the space with energetic vibes, as the dancers and gymnasts transformed themselves through insect like movements – flying, leaping, crawling and bouncing across the stage.

Melting into a smooth bossa nova tune, colourful characters from the world of insects ever so suavely were introduced to the show: the Master Flipo, who keeps order in the frenzied world of insects; the Foreigner, who from another land lugs the peculiar ovo with him; the ever so colourful and flamboyant Ladybug; and many more, including the Dragonfly, various spiders, fleas, ants, butterflies, fireflies, mosquito’s, scarabs, crickets, the slinky Creatura and of course the life of the party, the cockroaches also known as ‘las cucarachas’.

The most beautiful act was the interlude into the Spanish Web duo. Softly lit and accompanied by a stunning melancholic cello, the solo artist inside the cocoon that hung from the ceiling elegantly contorted herself within the silk, wrapping and weaving herself inside the fabric, before emerging from the chrysalis as a stylish butterfly.

Equally as incredible and completely breathtaking were the scarabs, flying trapeze artists. In a matter of moments the stage transformed into an aerial arena where performers were flying through the air at great speed and height demonstrating intense coordination as well as control. The artists were not only caught midair by supporting performers, but midair, upside in a handstand on a tiny platform!

And finally, the oh so joyful ten bright green crickets bounding and leaping off the trampoline and power track onto the wall, left a striking visual image, choreographed in contrast to the single supple red spider who elongated herself upwards, sideways and downwards and across the back rock wall.

The visual imagery presented in OVO certainly was a window into the world of insects. The stylistic approach in each movement, costume, prop, backdrop, lighting intention and music composition certainly helped one’s imagination run wild. The synergy between all these elements without a doubt took the Cirque du Soleil signature language to a new level.