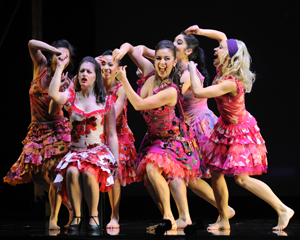 How strong is your Broadway Brain? Test your knowledge of the world’s greatest musicals.

Jersey Boys is a documentary-style musical based on the story of which band?

b) The Four Seasons

What is the longest-running show on Broadway?

c) The Phantom of the Opera

Which of the following was NOT based on a film?

a) The Lion King

What do Movin’ Out, Moonshadow and Mamma Mia have in common (besides all starting with M)?

a) They were all directed originally by Bill T. Jones

b) They were all adapted from novels

c) They are all ‘jukebox’ musicals

d) They were all choreographed by Twyla Tharp

Cabaret was based on a book by which author?

Which of the following is NOT a character from Annie?

In which musical would you find Peggy Sawyer, Dorothy Brock and Julian Marsh?

Who choreographed Gypsy, West Side Story and On The Town, among many others?

Which Andrew Lloyd Webber musical is derived from poems by T. S. Eliot?