Good news for the musical theatre industry – the next generation of performers is going to be top notch. APO Arts Academy presented their mid-year showcase Up the Ladder to the Roof at The Malthouse, and it was entertaining from start to finish.

The show opened with a well-rehearsed bang; the title number from Ragtime. Excerpts followed from both modern and classic musicals, including many that are not so well known. Not a Chicago or a Hairspray number in sight!

In the intimate setting of the Beckett Theatre, and with no backdrop or set, these stars in the making had nothing to carry them but their own performances – a challenge which they rose to.

Lachlan Graham was disturbingly convincing as the creepy stalker, doing a fantastic job of I Really, Really Love You. What a fun role it must have been to play! 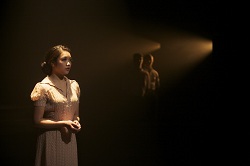 Celina Yuen, after 2.5 years of training, is now joining the cast of 'South Pacific' in the principal role of Liat, for Opera Australia. Photo by George Papapetros

But Act One really belonged to Casey Reddington; funny, beautiful and assured. Her solo number, Crossword Puzzle from Starting Here Starting Now established her as one to watch. She shone again in Single Man Drought (from I Love You, You’re Perfect, Now Change) alongside the equally gorgeous and charismatic Camille Wai.

In Act Two, James Leone and Celina Yuen did justice to the comic We’re Just Friends. Melissa Harrington was hilarious as the lustful Frau Blücher from Frankenstein. Second Year student Leigh Kuehnapfel shone throughout, displaying a fine versatility through his lead roles in numbers from The Music Man and Company.

Positioned upstage, a fabulous three piece band (including Musical Director Russell Hodges on piano) accompanied the entire showcase. The costumes were immaculate throughout. While the singing was wonderful, it would have been good to see some more strong song and dance numbers – the little dancing there was showed some good talent.

The lead performers in this group are an incredibly polished lot, equally strong. However it was the  ensemble numbers that really impressed: smart direction and choreography and pitch-perfect harmonies. The entire cast is a credit to Artistic Director Pamela Apostolidis, as well as Derek Taylor, Scott Hendry and the rest of the APO faculty.