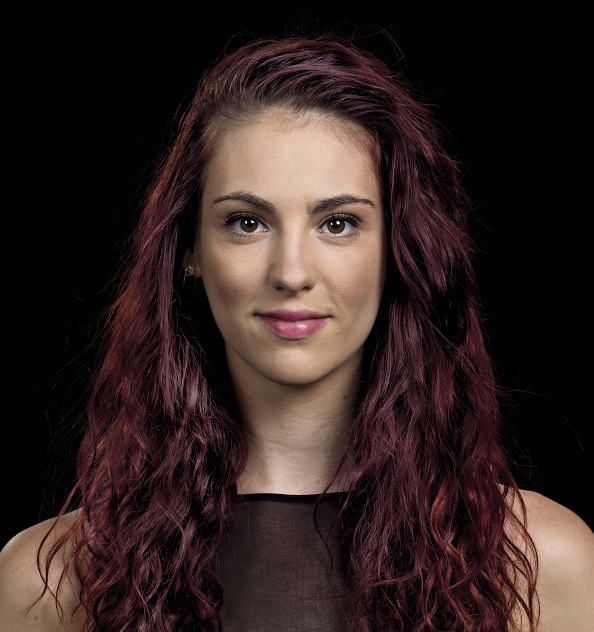 A little over three years ago, household dance fans across the country sat biting their nails as they waited to see who would win the third season of So You Think You Can Dance Australia. But having made it to that stage meant that Jess Hesketh was already winning: her dream was about to come true. Crowned runner-up of the reality TV show, Jess was awarded one of the most coveted posts in the dance world – a contract with Australian Dance Theatre.

After a decade of adoring the Adelaide-based contemporary company, just knowing that the contract was available helped Jess propel herself through the competition. Even now, having worked with the company since September 2010, she says it’s “still a bit surreal”.

ADT is currently rehearsing to take its acclaimed work Be Your Self to Sydney, as well as performing an excerpt in Let’s Dance, a gala season that is part of The Australian Ballet’s 50th anniversary.

Jess in rehearsals with ADT. Photos by Chris Herzfeld

Be Your Self draws on investigations into neurobiology and Buddhist philosophy. These two positions in one sense are worlds apart, in another, they are two sides of one coin: the science of poetry – or the poetry of science. To use Jess’ own eloquent description of the work, “it cross-examines the vast complexity of who we are and what we’re made of. It really looks into the subject of selfhood. Not only the physical aspects, but the emotional aspect of what makes us human, and how the physical and emotional sides do work together to create us as humans.”

As with all of ADT’s works, Be Your Self, with its fusion of contemporary dance, breaking and tumbling, is incredibly demanding physically. However, Jess says that the emotional side of the work is equally challenging. In the research stages, Artistic Director and Choreographer Garry Stewart consulted with Professor of Physiology Ian Gibbons from the Flinders Medical Centre. The insights he shared into the neurobiological functions of the body have greatly informed the work. The result? An added depth and dimension to the movement, which Jess says she is “really attached to”.

To add yet another dimension, Stewart engaged leading design studio Diller Scofidio + Renfro to create a set piece. The cutting-edge New York-based firm are responsible for multi-million dollar architectural projects, such as the complete refurbishment of the Lincoln Centre for the Performing Arts, and the expansion of the School of American Ballet. With their backgrounds in the visual arts, DS+R like to, as Stewart says “keep one foot in the arts” and “were kind enough to lend their support to Be Your Self”. The resulting set piece seeks to reconstruct our perspective on the body.

Jess in rehearsals for 'Proximity'

Be Your Self is in fact the first piece that Jess worked on when joining the company. At that time, the work had already been created, however the whole second half was about to undergo a drastic revamp. This would be Jess’s first real experience not only as a professional dancer, but as a creative collaborator in the developmental stages of a dance theatre work – a role she still finds challenging.

“Creating and choreographing are areas that I haven’t really delved into a lot throughout my training,” she explains, adding that she is grateful to the familial atmosphere at ADT. “The other dancers are awesome. They’re so supportive and they’re always helping me and giving me tips. It’s almost like my own personal choreography lesson every time I have to make up a new solo.”

With the freshly developed Be Your Self in their arsenal, the formidable ADT embarked on a three-month European tour early in 2011. Returning home, they collaborated with visual artist Thom Buchanan and third year students of the Adelaide College of the Arts on a new multi-media project titled Worldhood. Next, they developed and performed Proximity, in conjunction with French video engineer and artist Thomas Pachoud. After the current season of Be Your Self, it will be back to Proximity for another European adventure.

“It’s just one thrill after another,” says Jess. “I’m living my dream. ADT is something that I’ve wanted to do for such a long time. Actually being here and being part of these amazing  productions is a heap of fun every day.”

And it seems she has fit well into her new home. Stewart calls Jess “a really beautiful dancer with incredible facility, remarkable versatility and the ability to do anything that she puts her mind to.” He adds that it has been “interesting with her coming up through the commercial field and through television, but that has given her a lot of ability to connect with a performative presence.”

Another thing that television exposure gave her, Jess says, is a diverse wealth of experience. She acknowledges that after full-time training, dancers and other artists often find it difficult to find work and transition into developing themselves professionally. “Having SYTYCD was the perfect bridge to close that gap,” she says. “It opened so many doors for me. The amount of choreographers that I was exposed to and I got to work with on the show was just incredible. It set me up for a great start – and the ball continues to roll.”