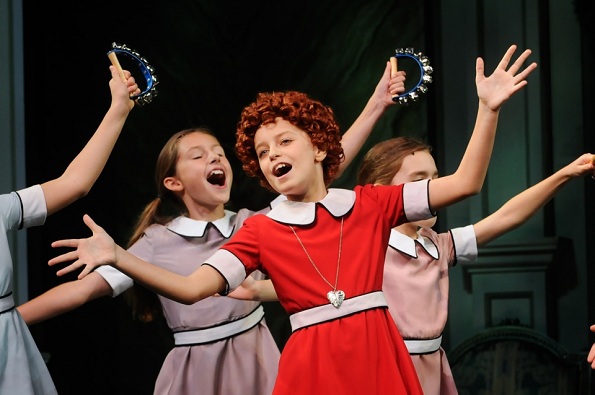 Chloe Thiel is an 11 year old girl who for the past 10 weeks has been on the ride of her life. Chloe was one of the three lucky girls who shared the role of Annie in Annie the Musical in Brisbane. I was lucky enough to sit down with Chloe to share her excitement about the role and find out more about her experience.

Chloe, you have obviously trained in the performing arts. How many years have you been dancing, singing and acting?

I have been singing, dancing and acting since I was 2 1/2 years old.

Where do you attend classes?

I go to Qld National Ballet and Northside School of Dance for dance classes, and Debbie Bradford for my singing and voice coaching. I also perform with Brisbane Junior Theatre.

What led you to audition for the role of Annie?

The main reason I wanted to audition for Annie was because I remember from a very young age watching Annie the movie and just falling in love with the character of Annie. I love her outlook on life. Plus, she’s an amazing role for an 11yr old to play.

It was a very competitive audition. What do you think set you apart from the hundreds of other girls auditioning?

I’d like to think my preparation helped set me apart and also hopefully that I listened and followed instructions well at the auditions. I found a lot of girls were loud prior to the audition, but went quiet during the audition. My singing voice I think helped me. I love ‘Tomorrow’!

Were you confident that you had the role after the audition process?

A little part inside kept telling me I had a great chance of having the role, but doubts kept creeping in.

Do you think you have a similar personality to your character?

I feel there are a few aspects of Annie’s personality that reflect my own, the main one being her ‘happy go lucky’ outlook on life. I hope this really showed through in my acting due to the fact that I could relate to it! However, I’m lucky, I have loving parents – but maybe a Daddy Warbucks would be nice! Haha!

Did you have fun with the rest of the cast?

I really enjoyed working with the whole cast, especially Anthony Warlow, Nancye Hayes and Julie Goodwin. I had such fun with Anthony, he tells the best jokes! I feel we all connected well and right from the start I thought we’d glow on stage.

After being around such famous people it must be hard to go back to normal life. Do the kids at school or dance treat you differently now that you are a ‘star’?

I have found since Annie that more students speak to me now, asking questions about the show and my wonderful experience. A lot want to know what the stars are really like.

What is the best part of playing Annie?

I would have to say the most exciting part for me was the honour of performing Annie on Official Opening Night (April 12th). Being able to perform with such amazing stars and getting a standing ovation from an amazing audience was wonderful! Then of course I got to read great reviews the next day after the thrill of the party as well. It was AWESOME!!

What did you do to prepare for the stage each night?

Before I went on stage I felt it was important to have quiet time with myself, just preparing my mind set for the rest of the night. I would rethink all the notes I’d been given by the director/choreographer/musical director or adult cast about my character.

Even though you wear the famous red wigs on stage, have you been recognized by a complete stranger?

I was once approached in the street by someone asking if I was one of the ‘Annie’s’! Also when coming out of the QPAC carpark once, a lady said to me, “you’re Chloe Thiel right? I’ve seen all three Annie’s and I loved your performance so much, I’m coming again!” It was really lovely to hear and made me realise I must be doing an OK job!

Could you get used to being a star?

Of course! It’s amazing getting all the attention. Although, I’d imagine that if you weren’t feeling well or something that having lots of people surrounding you when you just want to go home after a performance to get better might be a bit hard.

What do you want to do with your talent after Annie?

Now that Annie is finished I want to carry on with my training and do any auditions I can to gain as much experience as I can. I want to fulfill my passion for musical theatre and maybe one day become a star like Nancye Hayes and Anthony Warlow.

How have you found the experience as a whole and would you do it all over again?

My mum told me that this experience would make or break my love of musical theatre as it would be hard work. She was right….it was hard, but SO much fun!!! It has made me want to continue auditioning and striving for bigger and (if possible) better things. I would do it all over again in a heartbeat!

Chloe Thiel is a very talented little girl who has a very bright future in the performing arts. She captivated audiences during the show’s five week run in Brisbane and received much recognition from both audiences and critics. Remember the name ‘Chloe Thiel’ as she has only just begun what is sure to be an amazing career in the theatre.